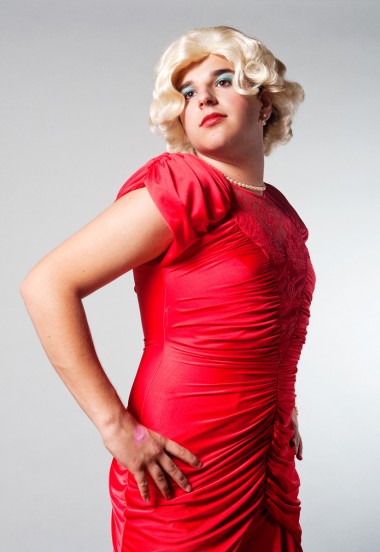 This picture was taken at Gay Prom in May. I still have that dress. This one time I was canvassing for President Obama in Pennsylvania in this lovely town called Milford. There was a thrift shop there and I saw the dress, and was like, “That is so fabulous!” That wig I bought the day of prom. Blond isn’t really my color because I’m olive-skinned. I usually only do drag for special occasions. I just think it’s fun sometimes.

I’m not dating the girl I was with when this picture was taken, unfortunately. You know, in the end I just realized I didn’t love her. I’m dating someone new now. She’s also of the female persuasion. We both go to French Woods, this performing arts camp. We kind of started a band together too. Our voices sound really good together. It also works because we’re both bisexual and everything. It flows well. It’s not Facebook official yet. I decided I wanted to wait a month between breaking up with my previous girlfriend and starting a new relationship. It’s complicated.

When I was 11, I decided I was bisexual. One day it just occurred to me that that was a possibility. It wasn’t a big secret, where I was coming out to everyone. As soon as I knew, I told everybody. I was at theater camp, so everyone is gay, and I was also raised around gay people. My mom’s best friend, Uncle Gary, is gay. Everyone’s gay. If you come to my house you’re guaranteed to hear a rousing chorus of an Ethel Merman show tune.

I haven’t told my parents yet. It’s kind of weird. I’ve just never felt like telling them. It’s not like they would care or anything, with all the gay culture I’m exposed to. Even though it’s kind of tacky, I decided I’d post it on Facebook today, which is National Coming Out Day.

I haven’t actually ever dated a guy. I’ve hooked up with guys along the way. I’ve made out with a guy before at camp — he was a terrible kisser — and my first make-out ever was with a guy. He was a really, really good kisser. The only opportunities I’ve ever had to date a guy are when I’m at camp.

There’s no one at school who interests me in the least. I don’t know if there are any gay guys in our school except Cameron, but he’s kind of my best friend and that would be weird. But I barely ever get a comment for being bisexual. Because Ossining is so diverse, there’s no real majority of any race. Nobody really gets made fun of in Ossining. There’s no dominant group, so there’s no one to make fun of anyone.

Most of everything that’s ever happened to me, except for my previous girlfriend, happened at camp. Camp is a great big party of a bunch of nerds and hipsters, and we sing a bunch of songs and put on a bunch of shows. Those weird kids who come for sports are ignored. It’s the one place where jocks get bullied. It’s kind of fun.

I do all sorts of theater and music. At camp I was in Rent. I played Roger. I was in the Metropolitan Opera Children’s Chorus, and then my voice changed and they kicked me out. I’ve been in a band with some guys from school and I write a lot of songs. It’s indie-experimental-pop-rock-folk, etc. I just started recording an album that I can sell, God willing. Please, give me money.

In terms of college I can’t decide if I should go to music school or drama school. The one I’m mostly interested in is Hampshire. If I go the way of drama, there’s Yale and Tisch. I think I’m in a better place than most of my classmates. Most of my classmates don’t have an inkling of what they want to major in. As far as who I’m going to be with in the long term, male or female, it doesn’t really matter which gender. Whoever I love is the one I’m going to be with. It just sort of is.