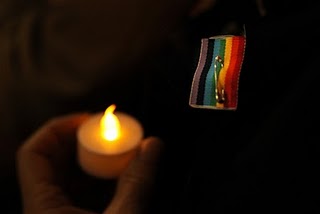 The LGBT community has stood together through many vigils as of late, realizing the power to unite under a common cause — to acknowledge those that are no longer with us and to increase visibility of our community — is more important than ever. We went to a wonderful vigil last night at the New School during which attendees introduced themselves to the crowd stating their name and the way in which they identify; having strangers stand up around you and proudly shout who they are for all to hear was so very moving.

We Are the Youth was started to provide a space for LGBT youth to share their stories. Over the past few weeks, it’s become clear just how crucial it is to fight stigma, increase visibility and let others know that they are not alone. The small action of coming out (even as an ally) can have a huge impact on those around you, in ways you may not realize, and can sometimes be the difference between life and death.

aLater that same day, Rutgers University freshman Tyler Clementi jumped to his death after being outed on the Internet by fellow classmates.

Clementi and Walsh’s tragic deaths follow those of Asher Brown and Billy Lucas, both of whom took their own lives earlier this month after enduring anti-gay bullying for far too long.