I feel like this isn’t my body. In my mind right now, walking around my room, I feel like a boy. Then I know when I walk in the shower I’m going to totally freak out. I try to shower in the morning when I’ve just woke up, because I’m focused on what’s going to happen in the day and my eyes aren’t really open yet.

Once I get my top surgery I don’t think I’ll feel that way. Bottom surgery isn’t the top priority for me right now. Everyone has to wear pants. It’s not like it’s hard to hide, and right now bottom surgery is really terrible and expensive. Technology is always advancing, so maybe I’ll have bottom surgery some day when it’s better.

I’m starting hormone blocker treatments next week, so after I have top surgery I’ll stop having female development. I was supposed to get top surgery in June and then I found out I couldn’t get it until August. I got really upset about it, because I’m going to miss the whole summer and not be able to go to the gym or swim. It’s just a pain, swimming with a binder and everything.

Because I’m not 18 yet, I have to get my parents’ permission to have top surgery. My dad signed the paperwork, but the other day he asked me, “Are you 100 percent sure?” And I’m like, “Duh.”

I don’t know if I’ll go on testosterone. I’m really nervous about how it would affect my singing voice. I’m waiting to see what happens with my music career. If I were to go on T, it probably would be later on in my life. If I have a totally different voice, I might lose fans or I wouldn’t be as good. It would kind of be like starting a whole new career. But when I picture myself in three years, I’m on T and I have a really awesome beard.

Being transgender and being a musician go together for me. I’ve been doing a lot of speaking gigs. I just spoke at the Rotary Youth Leadership Awards, and then I sold 40 CDs afterwards. I’m recording an album, which is coming out in May. This summer’s going to be big for me. In June I’m playing at Milwaukee Pridefest with my studio band in front of 10,000 people.

When people find me through my music, a lot of them know I’m transgender and some of them don’t know. But when they friend me on Facebook, they find out. I don’t think they know while they’re watching me perform.

I love playing solo, and also love playing with my studio band. The energy is bigger and better with a band. I’ve played almost 200 shows. I’ve been on tour a few times. Everything’s DIY, which is “do it yourself.” The music industry is dying. You don’t make much money these days. I book everything myself. I do all my promotion myself. My mom drives. Usually I’m supposed to pay for gas on tours, but on the last trip she was like, “It feels like a vacation. You don’t have to pay for gas.” She’s that rock ‘n roll.

When I first started performing, a lot of girls would hit on me after the shows. One girl wrote my name all over her notebooks at school. Another girl pretended I was going out with her. Some really weird things happen when you’re performing.

As told to Diana Scholl.
Photo by Laurel Golio, taken in Long Island, NY, 2010
To tell your story, email hello@wearetheyouth.org 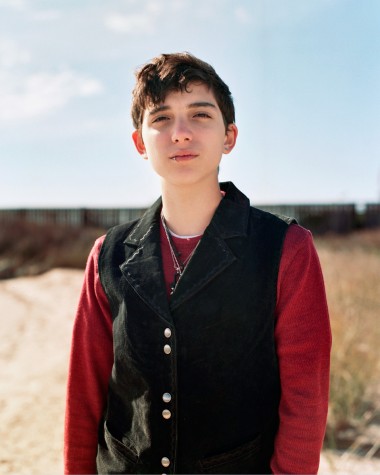 My Coming Out Story: Ryan

In honor of National Coming Out Day, we’ll be sharing unique coming out stories all week. Ryan tells We Are the Youth how the Larry King Show aided in his coming out process:

When I came out as transgender, I came out very slowly. My brother was the first person I told, then I told my mom when I was 14. I told my dad when I did because he went away and brought back this really girly necklace for me. I just had to tell him that day because I felt guilty. I came out as trans to the world when I was on the Larry King Show. I was telling one person at a time at school and if I weren’t on the Larry King Show it would have taken years to come out. It’s easier just to be out. When you’re trans, it’s different. If I didn’t come out people would still be calling me “she,” or by my birth name and I’d be extremely uncomfortable. In some cases it’s not a good idea to come out, if your safety is in jeopardy. For me it was just a convenient time to come out

Check back next month for a full feature on Ryan!