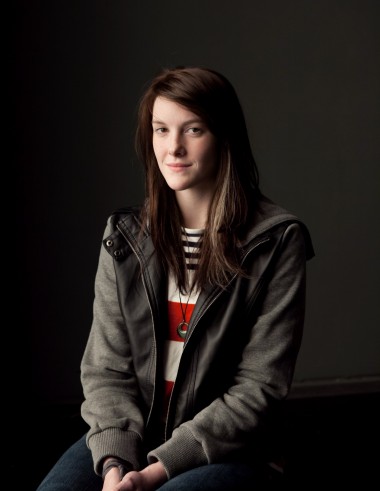 I came up here two months ago. I want to become a film major and there are some good schools around here. The plan was to come here, and work a lot to pay for school. Now I’m working at a factory. You’re just assembling and passing on. It’s very boring and there’s no music and it’s just machinery. But you find the nicest, most genuine people there.

I love Minneapolis. I’ve always been kind of a city girl, but I was born and raised in Shakopee, Minnesota, and I lived out in the country. I didn’t wear a shirt until I was seven, and ran with the wolves at night. I’m glad I had the country in me when I was a child because now I’m more of a free spirit as my dad calls me.

My parents are very conservative. My little sister is 12. She asked me, “Who are you voting for?” and asked, “Are you voting yes or no?” She was talking about Amendment 1, to ban gay marriage. I said I’m voting no. She said, “I’m voting yes at kids’ vote.” And she went through a whole bible verse about how God created Adam and Eve. She’s in Catholic school that’s really conservative.

I went upstairs and told my parents what happened and they were like “Well, we’re voting yes.” and I’m like, “You’re not even doing it for me, I’m your kid.”

I came out to my parents last year. When I told them they started asking awkward questions that if I were talking about a boy they would never ask. Like, “Are you attracted to her?” Ummm, yeah. I thought my mom would be more understanding because she was on a softball team, and there were maybe three straight women on the softball team. But they didn’t let me bring a girl home for dinner, and I’m not allowed to tell my sister. And my mom was like, “Just because guys don’t like you doesn’t mean girls will.”

I first really realized I liked girls at prom in high school. I thought this girl I went to school with was gorgeous and I had a huge crush on her throughout high school and I just thought I thought she was pretty. At prom I was with a boyfriend I had for three years and I was like, “I’d rather be dancing with her tonight.” But you get scared at first because especially your parents are negative around it, and your friends aren’t okay with it either.

I’m a little lost right now but it’s nice to know that I’m being me and doing it the right way and at my own pace. It’s a long journey to figure out who I am truly.

As told to Diana Scholl
Photo by Laurel Golio, taken in Minneapolis, MN 2012
To share your story, email hello@wearetheyouth.org