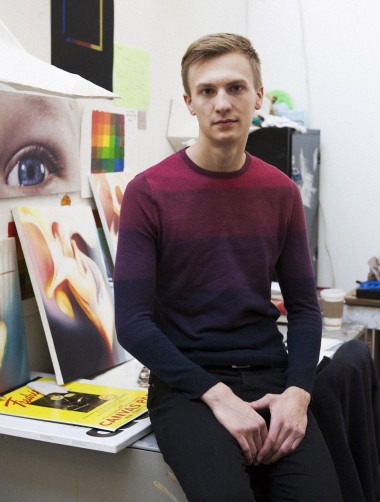 I knew I was gay from a very young age, probably as early as second grade when I knew that I was different from other people. I could not pinpoint it, but I could feel it. And that’s the only way that I can honestly describe it. Just that inkling, you know? Something in the back of your head that would just bug you all day. And unfortunately that didn’t help with my childhood because I was overweight, and I was artistic so that triple-whammy took a toll on me mentally and physically.

When I came out to my dad he did not flinch. He said, “You’re still the same person to me. And I’ll love you always.” And it was the exact words that I needed to hear. He actually offered to tell my mother for me, and I accepted his request, and she took it incredibly hard. Not so much in the fact that, “Oh, my son’s gay.” It’s the fact that she realized how much I was suffering for the entirety of my life and how much I had gone through. And because I was hurting, she was hurting.

It honestly surprised me how accepting my parents were because you go through living the majority of your life thinking that you’re gonna be rejected, and you’re gonna be denied, and all these things. And then hearing it for what it really is was honestly the greatest relief of my life.

My parents are everything to me. Of course you don’t know that growing up. You’re just worrying about surviving at that point because you’re going through so much shit, but really they are making everything possible for me right now. They are the most loving, supportive people I could possibly ask for.

They are very supportive of me pursuing a career in art at the Minneapolis College of Art & Design. I have always been interested in both music and art, and actually thought about applying to music school. That’s when my art teacher stopped me and said, “What the hell are you doing? You are an artist.”

A lot of the work that I do is based on how identities are formed from things like physical experiences, human interactions, and social expectations. What I’m most interested specifically is how society’s relationship with food and drink can create these identities. I grew up overweight and had my fair share of positive and negative experiences with food and I want to be able to create work that elicits honest conversations about these ideas.

I have a fascination with apples. Everyone has their niche or whatever and apples are mine. They’re aesthetically just the most beautiful thing I’ve ever seen. It also relates to my issues with eating disorders and body weight image because growing up I used apples as a coping mechanism. It was the one thing I could eat continuously and not be ashamed of. It’s a healthy choice and that’s so very important to me.

I was pretty  heavy when I was younger. The summer before fifth grade I lost a lot of weight. I said to myself, “Dammit I am sick of feeling like this. I am sick of being picked on.”

I had this mindset where I decided I was going to change for the better. It started with me l walking around the block in front of my house and then running. One block and then another block.

I remember people telling me like, “You look good!” and all this stuff. I felt amazing. I’ve been very diligent about being in shape and taking care of myself.