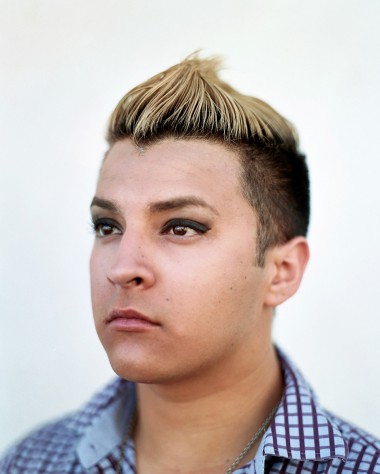 I was two years old when I came to the United States. My visa expired, and I didn’t know I was undocumented. I only realized once I saw all my friends had their driver’s license, and I couldn’t get one. I’m working on getting my work permit so I can finally work. I don’t let it bring me down whatsoever.

I’d like to focus my degree on homeless youth and just help them out. I’d do that for five or six years and then learn how to own a hair salon, and do make-up for movies and celebrities. I’ve learned stuff from YouTube. I’ve done females’ nails. It’s something I’d really like to do. Plan B would be to go to school to be a social worker because of everything that’s happened to me.

I come from a really close-minded town in Pennsylvania. It’s a really small town based on tradition and culture. I lived with my mother, and when I finally came out to her it went downhill.  I decided it was time to leave. I came to Las Vegas to meet my dad’s side of the family. I was 18, about to be 19. I wanted a change in my life.

I love being in Las Vegas. I’ve never been in a city full of diversity. You can go out in the city with a pink tutu and pink sunglasses. But things didn’t work out with my dad’s other family. I felt like they gave up on me so soon, but since I didn’t really know them I couldn’t cry over that. I’m not going into details of my situation, but I had a hard time. I had to leave and sleep in the streets for one night. It was nothing I was used to whatsoever.

I went to McDonald’s to use their wi-fi on my phone and posted on Facebook about what I was going through. My aunt in Pennsylvania saw it, and found a program in Las Vegas for homeless youth, and I started receiving services from them. Now I’m in their independent living program. My life turned for the better. I started going to the LGBT Center in Vegas. I’ve made a ton of friends there, and I met someone I dated for two and a half, maybe three months. We did fall in love. It was my first serious relationship. It was one of the best times of my life. He was in college. I was just barely finishing high school. It was two different stages of life. I wasn’t ready for the real world yet.

The best thing that ever happened to me was being in that relationship. I didn’t think I was capable of love. It made me realize I want more with my life. I’ve decided marriage is an option for me. It’s changed my point of view on life and marriage and children.

As told to Diana Scholl.
Photo by Laurel Golio, taken in Las Vegas, NV, 2013
To share your story, email hello@wearetheyouth.org