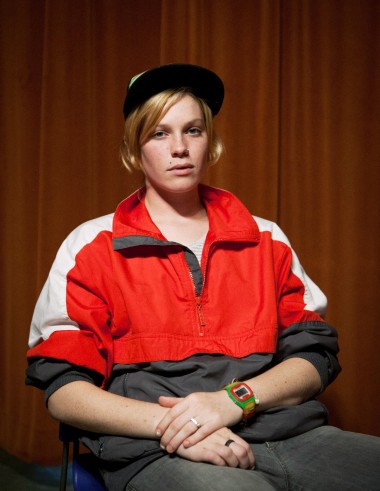 The most exciting part about associating as bisexual is that you don’t have to choose who to love. If you meet this wonderful woman and you’re  straight, it’s like “Well I’m straight, what am I gonna do?“ I don’t believe that love exists based on gender or gender roles. I already have the ability to love anyone so it’s kind of just what happens, happens. And I go with it.

The reason I associate as bisexual is not that I can’t decide. But I feel weird when I say I’m bisexual because from both sides, both the gay and straight, whatever that is, people don’t take bisexual people as seriously as they do one or the other. I think it’s because of the stereotype of young, naive girls attempting to get the wrong kind of attention from guys with that, oh let’s get drunk and kiss, I’m bicurious. It’s hard to be associated with that image when I open up and tell people about my sexuality.

I talk to my mom about almost everything so in 7th grade I was just like,  “Mom I’m pretty sure I’m bisexual,” And she did what most people do  when they hear bisexual. She was like, “Oh that’s a phase. You’ll get over it and you’ll decide which one you really want.” And I was like, “Okay, probably not.” But we’ll see. She promised her support either way.

I didn’t tell my dad at first. But I had him drive me to a date once with a girl because I didn’t have my license yet and I was like 15 or 16 years old. On the way to  Starbucks, I was like, “Dad just so you know, this is kind of a date.”  And he was like, “Okay.” It was kind of cool, he was pretty open about it.

When it comes to relationships and connecting with people in a different,  more intimate way, girls are just harder to figure out. I don’t know what they’re thinking, I’m constantly over thinking what they’re thinking. With guys I know what they’re thinking. It’s not even just that they want sex, but I know the basic tendencies of what guys think  about. I hang out with dudes more, so maybe that’s why. A good amount of my  friends growing up were girls, but I could never have that best friend until high school. I feel like I turned all my best friends bi, just by being around them. I mean that sounds weird, they were probably born that way. Regardless, all of us are able to be so close because we can understand each other, we can relate to each other on another level because each of us has that ability to love anyone.

At Minneapolis College of Art and Design I have a good percent of guy and girl friends, Everyone is so similar, just artistically and just being open-minded with things.

I’ve always been an artist. My other career pathway in tenth grade was possibly majoring in history which is the stupidest; even more worthless than an art degree. Not even art history but like, French history. In fourth grade I wanted to join the army. I got over that  pretty quickly. My uncle was in Iraq and my cousins have been in Iraq  and cousins have been in the Air Force, like flying planes and stuff which is pretty sweet.

But my uncle used to have me come to his house and he’d do Uncle Johnny’s Boot Camp where  I’d have to wear his helmet and his big vest thing and do army crawling around the house. He’d be like, “No that’s not right” and “You need to  do it this way.” He and my parents made me eat the  little meals you get that are in a little airtight brown plastic bag, like crackers and peanut butter that are disgusting. He was trying to not discourage me, but show me a little more about what it is. When he came back from Iraq and showed me pictures from the medical tents that he worked in, I never again wanted to go that path.

I think I was destined to go to art school. And Minneapolis was the one choice for me. I have older half-brothers and sisters who live here, and I see them all the time. I’ve always wanted to be close to them, but I never really had the chance until now. From what I understand, life used to be pretty tough up here, but now that things are different they love having me around, to be able to share with me a part of my family I’ve been missing out on for years. And I love having them around. Getting to know my family as people instead of shadows I happen to somewhat be related to is awesome.

As told to Diana Scholl.
Photo by Laurel Golio, taken in Minneapolis, MN, 2012
To tell your story, email hello@wearetheyouth.org