Miyuki Catches Us Up!

Dear We Are the Youth Readers,

I hope you’ll forgive me for being quiet for the past couple of months! I’ve been moving quite a bit but am currently at my second to last stop: Berlin, Germany! Less than a couple more months to go and I’m back home in the US.  During my silence on the blog, I lived in Seoul, South Korea, Istanbul, Turkey and visited Tokyo, Japan.  As you might have seen on the news, things are pretty heated in Turkey at the moment, and I happened to arrive in Istanbul the day before the demonstrations started. On my very first night there, a group of amazing queer activists welcomed me at a local bar on the Asian side of Istanbul, showed me two zines they made (one of which is called “Trans is Beautiful”).  I was eager to meet their friends and other queer activists in Istanbul when the very next day, people protesting the demolition of the last central park (Gezi Park) were tear gassed and sprayed with strong water hoses. Needless to say, all of the activists I had met on my first day went to the park in solidarity as many others from all over Istanbul (and the rest of Turkey) did as things got out of control. On the second day of the demonstrations, I tried going to the park but as I tried to leave the metro station, hundreds of crying and screaming people started running down the stairs away from the police brutalities, which I soon felt in my nose, eyes and mouth as a stray tear gas bomb was thrown down into the station.

I can still clearly remember the girl who sat two seats down from my on the train who had non-waterproof eye makeup on, and for that, her tears and incessant rubbing had turned her entire face black. After a moment of hesitation, a complete stranger gave her water and comforted her.  Around them, many others equipped with gas masks and lemon halves were treating their swollen eyes.

Why am I telling you all of this? Well, firstly I can’t not tell you something that left such a deep impression on me during my travels. But secondly, because I witnessed the queer movement in Turkey merge with this all encompassing movement against capitalism and against an increasingly intolerant dictatorship.  Even when I visited an old college friend down in the capital city, Ankara, the LGBTQ activists I met there were fully committed to the Gezi Park protests and all of its greater implications.  Ironically, the LGBT pride was planned to happen a few weekends after the initial protests and with the theme of “Resistance.” When I visited Gezi Park at a time that the police had retreated, I witnessed hundreds of out and proud LGBTQ folks who were empowered by this movement, standing by a large rainbow flag at a booth filled with free snacks and beverages for all to come by and share the space.  In this one park, anarchists, vegans, queers, housewives, artists, the people who fall on these intersections and everyone in between came together to be in solidarity with each other, to learn from each other, and to stand together for a common cause. 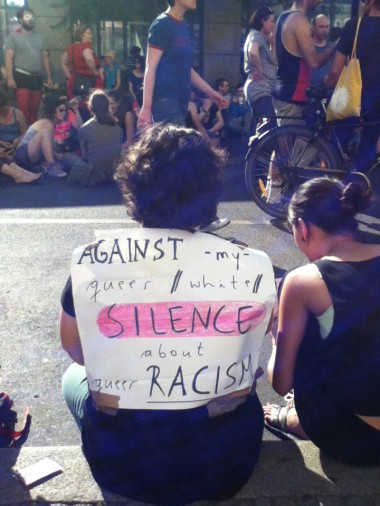 A small anecdote to explain the difference between CSD and TSCD.  At CSD, there were apparently some neo-Nazis who marched without any questioning.  At TCSD a truck that said anti-homophobia, anti-racism, anti-transphobia while announced its zero tolerance against discrimination every fifteen minutes. While I might come across as sounding like I’m in complete favor of TCSD, I’ve found that the discussion of race in Berlin’s queer scene very lacking.  Fortunately a friend introduced me to a queer and trans people collective but it seems like they have to do things separately if they don’t want to deal with blatant racism everywhere they go.

Though I planned to stay for much longer, I ultimately decided to leave earlier for Berlin because I sensed that I would either have to commit fully and entirely to this movement (what with almost every queer artist and activist I met involved in it) or come back at a later date. Although I stood in full solidarity, there are just some fights that you can’t claim as yours.  This one wasn’t mine. It was a history and social context that I learned about over the course of my time there, but ultimately I felt like I could better participate by being at the sidelines.

Now, in Berlin, my days have looked quite different.  Although there are Turkish people, groceries, restaurants, and even solidarity with Gezi Park campsites around the city, I don’t feel that sense of urgency that I felt while in Istanbul where at 9PM every night, the streets lit up with light and sound as all of my neighbors banged their pots and pans in a common protest against injustices.  I recall feeling my blood bubbling as I heard those thousands of pots and pans, feeling agitated and energized simultaneously.

Berlin’s own history of fighting back (A.K.A. The Berlin Wall) from a couple dozen years ago can be felt here and there in the voices of an older generation, but in its new and gentrified neighborhood cafes, any sign of overt struggle has been wiped away.  I’ve heard Berlin compared to Manhattan in the 80s, an international village, and an entirely different world from the rest of Germany.  From my time here so far, I can say that  it is a truly unique city which is constantly in motion.  Before Nazi Germany, Berlin was a true queer art mecca (as I learned at the Schwules (“gay” in German) Museum), and it feels like that freeness and everything goes culture is back.  There are dozens of queer events happening every week and while I’d love to go to all of them, I’m finally learning that being selective will prevent me from burning out.  Another side effect of having such a large and active queer population is that there are many divisions and subdivisions. Take for example the typical pride parade.  Usually, there will be one main event, perhaps a smaller extra one like they have in Philadelphia (Dyke March) but in Berlin, there was a two-day Gay and  Lesbian (note the missing “Bisexual” “Trans” and “Queer”) Festival in a gay district in town, then the following weekend, a Dyke March, the main Christopher Street Day (CSD) parade (Berlin’s Pride Parade) and then Transgenialer Christopher Street Day (TCSD).

As always, I could go on and on about the daily happenings but I’ll try to wrap this up.  I’m currently trying to visit many different queer/artist/activist intentional community spaces, getting my hands on various zines and trying to meet a diverse range of folks here.  Berlin is keeping me extra busy with all of its exciting events and summer is definitely the time to visit what with the warm days that don’t end until 10:30pm and visits to nearby lakes.

As always, you can follow my travel blog at heymiyuki.wordpress.com and read (download and print) the rest of the zines at issuu.com/miyukibaker/docs for free when you sign up for a free account with issuu.com

With love and solidarity,