Dear readers of We Are the Youth,

I’ve just arrived in Kuala Lumpur, the federal capital of Malaysia from Singapore where I stayed for three weeks. Singapore was a shockingly different place from Australia where I stayed for two whole months. In fact, while I was expecting stricter laws, within the first two days of arriving in Singapore I already felt like I had to act differently than I was used to. Singapore is a city-state known for its rather extreme laws such as no spitting, no durians (a delicious but strong-smelling fruit) on the subway, no selling gum, no walking around your house naked, etc. But beyond law-enforced actions, I felt like people were watching my every move to make sure I followed the rules. On more than a few occasions, I was scolded by Singaporeans for small misdemeanors like not putting my spoon back on the plate at a buffet.

Despite feeling watched, I can confidently say that Singapore was the most mind-expanding country I have visited so far on my trip.  Each day, I learned something about the place, the world or myself that challenged me in the best way possible.  It was within such a structured and rule-regulated society that many things I hadn’t thought about before became clearer in contrast.  One of those things was the highly visible religious communities and the diversity of races.  Never had I been exposed to so many practicing Muslims before, and I had eye-opening conversations with women who wore the hijab who identified as feminists as well.

In terms of the queer scene, I found that just below the surface was a network of artists and activists who were doing incredible things.  Thanks to the artist/activist/educator extraordinaire Tania De Rozario, who was a contact from when I interviewed her on Asian, Gay and Proud, I got to know a section of Singaporean society that was critical of their government, prolific in their art making and organizing events around queer and feminist issues.  An important fact I should mention is that according to Section 377A of Singaporean law, male homosexual acts are illegal and punishable.  This has been a strong propelling force behind many activist groups that are working hard to fight homophobia.

One of the main events that was happening while I was there was the Slut Walk.  It’s organized predominantly by queer women, and leading up to the actual event were several events where queer artists and activists gave talks, and workshops on consent were conducted.  Another organization that I got to know was Pink Dot, a Singaporean rendition of the Western Pride Parade. Unlike pride parades around the world, Pink Dot focuses on being family and straight-friendly by using famous straight Singaporeans to act as ambassadors, MC-ing the day, as well as using a cute pink mascot and encouraging everyone to wear pink to show solidarity.  They gather in Hong Lim Park (which is the only place Singaporeans can all gather to “protest”) and essentially form a massive pink dot! The effect is quite something: 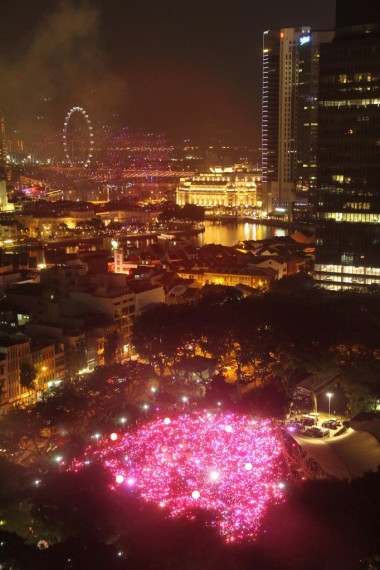 While more radical groups and individuals on the ground think that Pink Dot is playing things too safe and promoting homonormativity, I think that their approach is one that many Singaporeans are more willing to accept.  During my stay, I also visited an incredible art show called Archiving Cane at an independent art venue, The Substation, where artist Loo Zihan created a powerful installation, which included many newspaper clippings, his recent performance “Cane” and a wall that displayed the several licenses he needed to apply for from the government.  To backtrack a bit, here’s some historical context.  In 1994, 12 gay men were arrested and caned for soliciting on the streets.  They were arrested because 12 cops went undercover and propositioned these men.  The response from the gay community was obviously of anger, but one artist Josef Ng decided to do a performance art piece in protest.  He set up 12 tiles, with a block of tofu and bag of red paint on each.  He then symbolically caned each piece, bursting the bag or paint and crushing the tofu.  Then he turned around, snipped some of his pubic hair and added the finishing touch by sprinkling some on each piece of tofu.  At the end, he asked a member of the audience for a light and he took the lit cigarette and pressed it against his skin saying “maybe, a silent protest is not enough.” The media pounced, denouncing his work as an obscenity and reporting on the state reaction, which banned him from performing ever again in Singapore as well as ending public funding for performance art for the next ten years.

Flash forward to 2012, Loo Zihan re-enacted the performance but this time with a few alterations such as shaving his pubic area, and when it came time to extinguish the cigarette, he said that he would move outside because it was illegal to smoke in the building.  And for his show, he wanted to make everything as transparent as possible, by including the government and by showing every last detail of what remains of the Josef Ng story.

When Zihan and I sat down for a chat, I learned about the subtleties of how the government works its censorship.  For instance, his show which had to be rated R (21+), if anyone under the age of 21 entered, the $20,000 down payment would be taken away.  In the 90s, when punk rock was becoming popular, they banned moshing, requiring show organizers to pay $2000 in the event that someone was caught moshing.  The result of course was that the punk rock scene died down.  Who would pay $2000 to put on a show that was expected to produce just a few hundred dollars?

There are many more stories and people who are doing amazing things to expose such facts in Singapore.  If you’re interested in seeing all of the people I interacted with, you can check out the links under Singapore on the following page:
http://heymiyuki.wordpress.com/links/  I’m currently in the process of putting together the Singaporean queer art/activism zine as well so keep an eye out for that.

Last but not least, I completed my Australia zine while I was in Singapore. Check it out:

Thanks for reading! Let me know if you have any questions or comments: heymiyuki@gmail.com and follow my blog for more updates: www.heymiyuki.wordpress.com