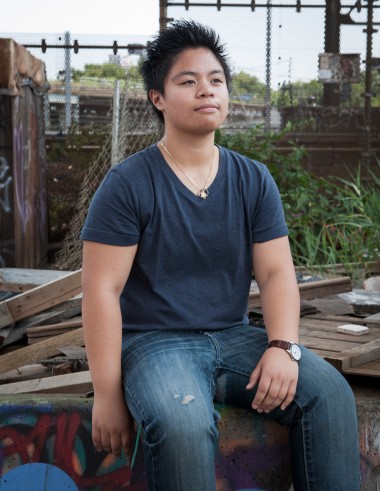 I met my girlfriend through the fellowship I was accepted to sophomore year. We clicked because — same-sex problem — we’re both named Victoria, and there was name-tags on the table and we both reached for the same name tag. We talked about gender study stuff and had a good conversation, and then she asked for my number.

We’ve been dating a little over a year now. This is the most adult relationship I have ever been in. My parents didn’t like her at first, but not because she was a woman or anything. My girlfriend before her was Filipino, and knew all about Filipino culture and went to church. They kind of took her on as her daughter. And here comes my new girlfriend all white and talking about women’s issues and how God doesn’t exist and God is a woman and things like that.

But even though she doesn’t practice a religion, she goes to church with us on Sundays because she knows it’s something my family does. She spends time with my my parents, goes to family gatherings with me, and is even picking up Tagalog quickly. She showed my parents that their presumptions were misguided.

We come from different backgrounds but we have the same work ethic. Her financial situation was different than mine. For me, there’s always food on the table, we have a nice house. The family life has always been stable except for those few years when I came out.

When I was eight or nine, me and my mom saw two women on the train with a bunny rabbit in a bag. They were cuddling the bunny rabbit, and the more feminine woman wrapped her arms around the more masculine woman’s arms and laid her head on them. My mom turned to me and said, “Do you want that?” And I was like, “No.”

Three years later, my parents were on the couch watching a Filipino soap opera. I asked them to turn off the TV, because I had something important to tell them. I reminded my mom of the women with the bunny rabbit, and told her, actually, I kind of did want that. So that’s how I came out.

I knew that my parents loved me and would never kick me out, but I know it was hard for them to handle. For about a good year after I came out, I just kind of got the cold shoulder from my parents. They wouldn’t acknowledge that I was there.

But I just showed them that this wasn’t a disability. My mom was mostly just worried that I would get beat up. I was overweight, timid, a bookworm, Asian and a masculine female. My first language was Tagalog so I had this accent and people made fun of that. All together, this made me the perfect target.

My beatings kind of went up a notch when I was finding out who I wanted to be. But I went through grade school, didn’t get beat up bad, and when I did, I didn’t tell my mom.

I also didn’t know what to do with my vagina. I didn’t know what an orgasm was. But there was a video for some reason which I really liked, and I had my first orgasm, and I was like, having a vagina is not that bad. Maybe being a girl isn’t that bad.

After self-exploration and learning there is such a thing as being a masculine female lesbian, I realized I’m comfortable in my body, and if I were to do all the things that transgender individuals have to go through, I didn’t think I wanted it that bad. So I was like, okay I must just be a lesbian.

As told to Diana Scholl.
Photo by Laurel Golio, taken in Queens, NY.
To tell your story, email hello@wearetheyouth.org