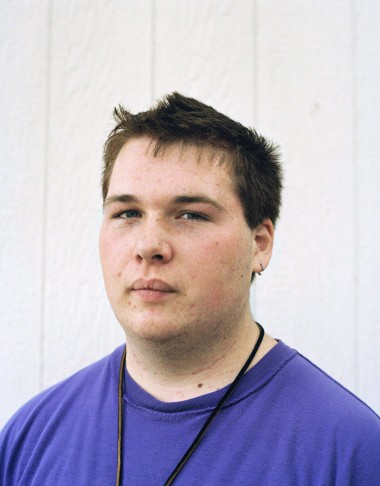 Ever since I was little we were raised Methodist. Not by my mom because she’s not very church-y but people in the family were very Protestant in their beliefs. I just never really got the whole idea of one God, and why it just had to be a man and there wasn’t any feminine aspect to anything. So I researched and I talked to people that were of other religions and Paganism was the only religion that came from the heart and made sense to me.

Paganism is a very old religion; 15,000 years-old, approximately. We worship nature. There are male and female aspects of the God and the Goddess and everything on Earth. We hold the Earth sacred, and worship it as a divine being in itself.

I was in a group of people who worshiped together, but that broke up mostly because our high priestess decided that she didn’t want the thing going on at her house because her mom wasn’t accepting of it. So it was hard to arrange meetings, and barely anybody showed up half the time. It was kind of a waste. So I’ve been worshiping solitarily since middle school.

Usually if it’s the full moon I’ll meditate and do all that, and call down the moon which means you draw down energy from the moon, because it’s the celestial symbol of the goddess. You put that forth throughout the world to heal the people that need help and find cures for diseases. I don’t heal other people because I don’t want people coming into the house who I don’t know. So I usually heal myself or the cat if she’s not feeling good.

Paganism is accepting of everyone–blind, gay, deaf, straight. I’ve always known since I was little that I was gay, which I guess is really cliche and everyone says that. I guess my first real experience was when I was at camp. The shower rooms weren’t divided, I guess, I thought it just felt right to be in there. I went out with a bunch of girls from like sixth grade to eighth grade. And I realized that after I went out with my best friend Ashley that I didn’t like girls and there was nothing there. I connected, just not in that way.

I came out to my mom at the end of eighth grade. I took her to Texas Roadhouse and she was like, “I kind of already figured from your mannerisms.” And I was like “Oh wow, Mom, thanks!”

Coming out lifted a huge weight off my shoulders. Life is much easier, because hiding from who you are can only bring bad karma to yourself and others. You’re not living the way you should so your body and your mind and your soul aren’t one. You’re just basically a zombie.

When I came out at school, at first a lot of people were very rude, and said, “Oh you’re just faking it because you want to be around girls.” I got called the f word all the time and homo and queer and all that. People would always go, “Oh that’s so gay “and then apologize to me. It doesn’t really matter to me until you apologize because then I know you meant it harmfully.

There are mean people everywhere who call you names and don’t like you because you’re gay or you’re black or Asian or whatever, there’s some stupid reason that people don’t like you for everything. But I like being around the people at school even though they might not like me. I try to love everyone because we’re supposed to.