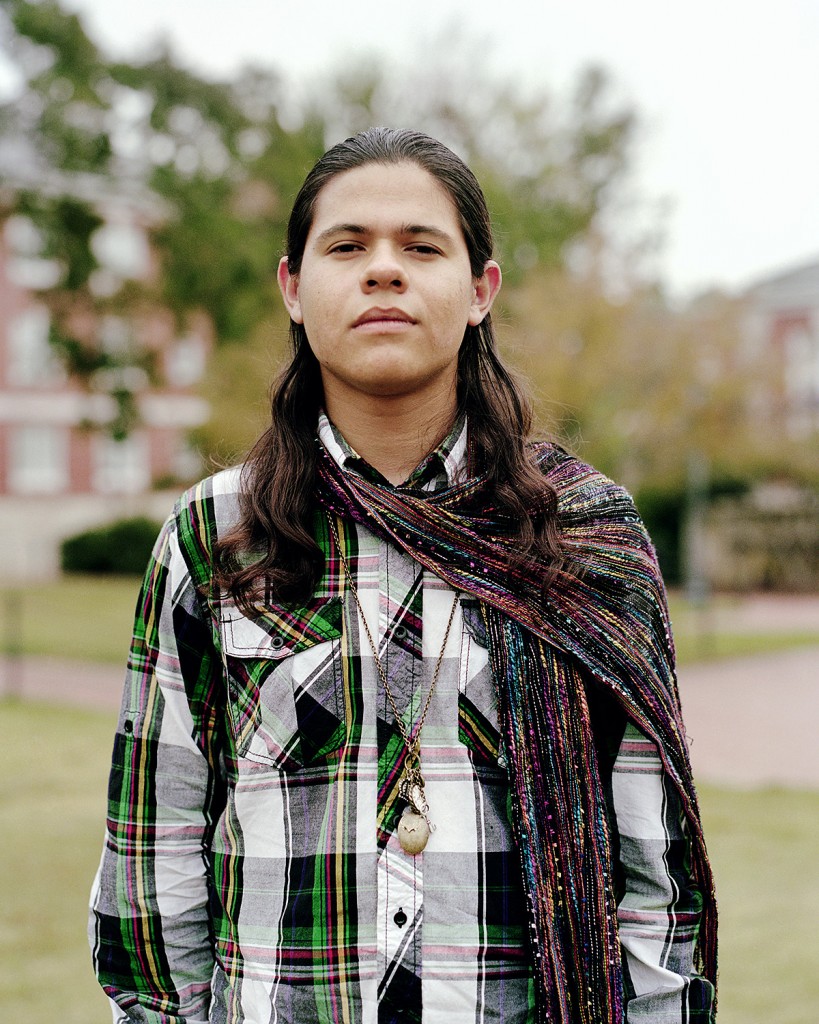 I actually did enjoy my high school experience. I never experienced the whole “Everything sucks, I hate everything” thing of high school. I’ve never really experienced bullying. I don’t know why. I’m pretty flamboyant, so you would think I’d be the ultimate target for anti-gay slurs.

But even since coming to Auburn, this big, football school in the Bible Belt, I haven’t even gotten a word. I’m sure there are comments behind my back. I’m not that dumb or idealistic. I joke that maybe it’s because I’m a long-haired Mexican person, so everyone thinks I’m in a gang.

But really, I think people leave me alone because they think I look down on them. I was talking to my ex a couple of days ago about this. He was saying in high school I put on airs, as though I’m above everyone.

I’m a quiet person. And I’m not a social person. I’ll wait for someone to ask me out, and I always say, “God willing, it will happen.” I’m like that with friendships too. I’ll talk to people who talk to me. I can be a hermit, but I still need to have some sort of social life. During the first week of school I went to an orientation event. I first waited to see if anyone would come up to me. I was wearing one of my flashier outfits. I’m a very hard-to-miss person most of the time.

My friends say every time they see me I’m in half-costume. When I was in Texas in the earlier years, I wore old-style collared shirts and just slacks. I didn’t wear jeans until I was 17.

I just like accessories. I’m always with a scarf or a hat or both. My parents aren’t very supportive of this. Or rather, my father isn’t supportive. My freshman year of high school I got my first real scarf when we went on a trip to New York. It’s a black velvet one. It’s more of a shawl than a scarf, but I cut it. That was my first real flashy item. Since then, I’ve been collecting scarves when I’m not with my parents. And now I’m not with my parents 24/7.

Against my will, my parents know that I’m gay. I put that I was gay on Facebook, because I’m open to pretty much everyone but my parents. I didn’t think my parents would look me up online. However, spring of last year, my senior year of high school, my mom told me, “Your dad’s not having a good time finding out you’re gay. He looked you up online.” From there it got worse. He had been answering my emails, emailing my mom behind my back about finding psychologists who still took gay-to-straight patients for conversion therapy. But nothing ever came of it.

My father and I had one talk about me being gay, when I was bringing the trash to a recycling place. He told me, “I used to think that way when I was your age until I met the right woman, and then I never looked back.” He thought he was gay and then one girl asked him out. He never had a boyfriend.

During this whole conversation I remember thinking, “I want to go away but I’m trapped in this car going home.” My father will get angry when you disagree with him, but he’ll say you’re the one getting angry. And that actually does make you angry. I was listening to him, but I can’t say I would take his advice. My mother has no problem with me being gay, but he makes her talk to me about it, and he’s making her look like the bad guy. It’s a sad story.

My mother is the only person I’d call my family. My sister is 11 and I love her. I have no reason not to love her, and I’d protect her, but my mother’s probably my only support system within the family.