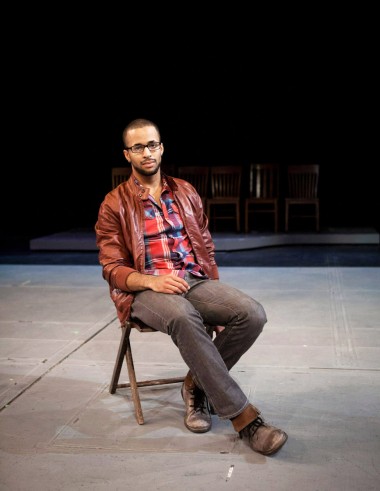 My dad and I weren’t super-close, so I didn’t feel I had to come out to him. But then September of last year I went to donate blood for the Red Cross, and I answered truthfully, and wasn’t able to donate blood.  I remembering thinking, That’s a thing? It was the first time I felt discriminated against because of my sexuality.

I was so mad, and I posted a status about it on Facebook. My dad saw it, and he called me the next day. He was really hurt I hadn’t told him. He actually cried that night. I had dinner with him and my sister, who always knew. My dad said he wanted to change the fact that we weren’t close. The air between us is a lot different now.

My coming out story to my mom is kind of funny. It wasn’t until my sophomore year of high school that I was sitting upstairs in my pajamas watching What Not to Wear and my mom comes upstairs and had clearly had a little wine, and a margarita or two.

My cousin and her were hanging out downstairs, and she was like, “I need to talk to you. Do you like boys?” and I was like, “Yeah.” Then she says, “Oh my God, thank you so much! I’ve been so worried! I’ve been hinting the last four months! I just wanted to hear it from you!” The next thing she says is, “Do you have a boyfriend? Because if you do, he can totally come over.”

I knew my mom would be supportive, because she and I basically grew up together.  She was 20 when she had me. My parents moved in together young, and were like “Let’s start a family!”  My parents aren’t together, and it was a single-parent household kind of thing with my mom.

One thing I take from my mom is being positive. If you stay negative all the time, your life is going to suck. Another thing I got from her is that we love being busy. I’m a freshman at Creighton University here in Omaha. I’m an administrator of the Queer Nebraska Youth Networks. I’ve done theater since I was in middle school.

Growing up I was always a little more effeminate and wasn’t super-great at football. There were only two mixed kids in my neighborhood, and I was always teased that I was a white boy. I was like, “Because I talk clearly? Sorry I was raised differently.” I was kind of chubby and awkward, but Dawaune was really dramatic, so I went to an arts-focused middle school.

At the Omaha Playhouse, I get to work with many different people, some who have done theater for longer than I’ve been alive. Now doing Legally Blonde, it’s so much fun. I go to school full-time, and everyone else has full-time jobs, but everyone lives and breathe theater. We’re closing tonight and it’s going to be the most traumatizing thing because we have so much fun on stage.

My goal isn’t to be on Broadway; my goal is just to do theater. I have no idea what I want to do after college. The reason I chose to major in sociology is that it has enough of what I like. I like people, and learning about people. My life is made better by knowing other people. Maybe one day becoming a teacher, becoming a counselor, becoming a something. Can I major in stuff and minor in things?

After graduation I plan on leaving. Going somewhere, giving it a try. I’d love to go to Boston, Seattle, or the Twin Cities. I love Omaha and am definitely going to come back. I enjoyed it and am really glad I grew up here, and am really appreciative of my family being here. If I want to start a family, I’d start a family here because it’s one of those perfect places.

As told to Diana Scholl.
Photo by Laurel Golio, taken in Omaha, NE, 2012
To tell your story, email hello@wearetheyouth.org