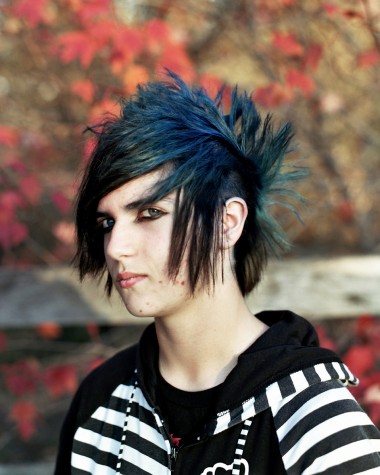 I switched schools because of bullying. There was a lot of harassment, and people calling me a lot of names. Fag, dyke, tranny. Nobody would do much about it, even my principal. I was like, screw this, I might as well go to a different school.

There’s more LGBT-friendly people at this school. I’m the only trans kid at school. It kind of gives me a little more pressure. What people see from me they kind of expect from other trans people. At the same time, it’s pretty awesome. I feel like I have to set an example in a way.

I like to go by “Mizter.” I made it up myself. I’m more male than female, but I’m not scared to feel feminine.

Before I came out as trans I came out as a fake lesbian because it was more generally acceptable. Everyone would make the joke that I was a she/he. I kind of knew I was always masculine, but didn’t know the name for it. I’d horse around with the guys. I’d rip Barbie heads off, all the stereotypes.

One day I just looked up “lesbian, gay” on Google, and on Google’s autocomplete  saw “transgender” at the end. I just clicked it. I was like, Woah, it’s kind of like me.

I was thinking how to tell my mom, which was really stupid because I wrote it on a to-do list. My sister saw it. Then my mom said she wanted to see me on the patio. Why are serious discussions always outside? I told her, “I want to be a boy, just so you know,” then I walked back inside, and she started freaking out.

When I first told my mom I liked girls, she told me I was a disappointment. That was one of the worst things. But I told her “You’re my mom, you’re supposed to love me no matter what.” It worked. In all honesty, now my mom’s been pretty accepting. I didn’t know if it would seep through. I can probably go on hormones by April or March. Seeing as how she’s my only parent, I think she’s done really well.

My parents have been divorcing for the past two years. My dad has a frontal lobe brain injury from a car accident when I was two. That kind of fucked shit up. His thinking processes are very, very, very slow. It’s put a big, big drift between his and my relationship. And my mom tried being with him, but he wasn’t the same since the accident. Their divorce was kind of a bummer, but it was kind of a relief. Me and my brother and sister were like, finally. It’s a lot better now.

I really, really, love to draw. I’m a comic book fanatic. I like to sing even though I suck at it. I love music, just in general. I listen to a lot of Lady Gaga. Her music is very inspirational. She and Adam Lambert really helped me come out. If Lady Gaga could do that, and if a gay guy could strut on the street, I can too.

As told to Diana Scholl.
Photo by Laurel Golio, taken in Bellevue, NE, 2012
To tell your story, email hello@wearetheyouth.org