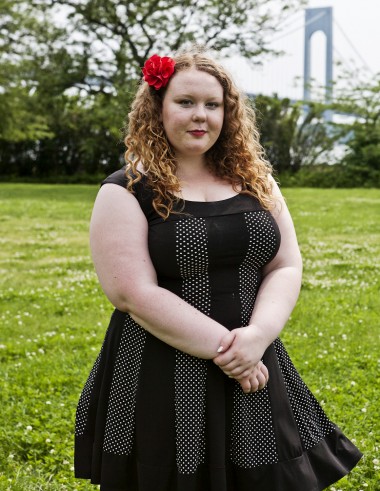 I love me some comedy. I’ve always loved watching comedy, but I didn’t discover how much I love performing it until I went to the Upright Citizen’s Brigade theater. My very first experience with long-form improv was a show called “Death By Roo-Roo: Your F’d Up Family.” It was really screwed up and morbid. I was like, “Sign me up for a class!” When I started taking classes, I became funnier, more quick-witted, but most importantly, more confident. I finally had an outlet in which I could truly be myself.

I definitely want to go into comedic acting. I’ve wanted to be an actress since I was five years old. If we pretend that my GPA hasn’t been completely screwed over by my not being able to go to school most of this year, I’d like to major in drama in college.

I’ve missed so much school that I have to make up four months of work over the summer. I was in an acute psychiatric hospital. In layman’s terms, the wacky shack. I have Major Depressive Disorder, Generalized Anxiety Disorder and Panic Disorder. I’ve attempted suicide before. This time, I knew I didn’t want to die, but I was just in so much pain that I couldn’t find any other way to escape. I was in danger, and didn’t want to hurt the people around me, so I checked myself in. Much of it is chemical imbalance, rather than environmental. Actually, none of my mental issues come from the fact that I’m queer, so maybe that’s a somewhat screwed up sign of progress? I’m very comfortable with my sexuality.

Parts of my anxiety were exacerbated by some religious indoctrination that I underwent when I was young. Religion comforted me and made me feel a little better, even though it was harmful in the long-term. As I grew older, I realized that I cared more about truth than I did about comfort.  My faith slowly began to fade as I learned more and more about the real world. Eventually I realized that I was an agnostic atheist. Some people get confused when I say that, because they assume that the terms “agnostic” and “atheist” are mutually exclusive, but they aren’t. Gnosticism deals with knowledge. Theism deals with belief. I can’t “know” that there is no god, the same way I can’t “know” that there is no Flying Spaghetti Monster. That’s why I am agnostic. But I don’t “believe” in a god. That’s why I’m an atheist.

I’m really into queer politics, too. I’ve recently become interested in gender politics as well. I call myself queer rather than lesbian or gay because not everyone I’m involved with identifies exclusively as female, if at all.Sometimes people don’t expect to hear something like that from me, because I’m very feminine. I like frilly dresses, makeup, heels and all that jazz.  I love to cook, I love to look after little kids and pretty much every other stereotypically “feminine” thing. That’s me. I’m more or less comfortable in this gender role that society has assigned for me, but I know so many people who aren’t. The idea of a gender binary, sexism and cissexism just makes me want to throw up.

When I came out to my mom, it was a storm of awfulness. I feel like she’s slowly come around to it, though. It’s been exactly two years since I’ve come out to her, and I think she’s finally accepted it, even though she may not be happy about it. Every now and then she’ll say something sexist and passive-aggressive. For example, if we can’t fix a shelf, she’ll say “see, this is why you need a man in the house.” But she’s a really good person at heart, and I love her so much. We all have our bigotries, we just need to be aware of them and try to educate ourselves as much as possible.

Aside from Staten Island, Bay Ridge is probably one of the most conservative areas of New York City. People aren’t exactly gung ho about Pride. My school, however, has been absolutely awesome. The last couple years my friends and I organized the Day of Silence and held a bake sale to benefit the GLSEN. I’m starting a GSA, or a Q&A–Queers & Allies–as I like to call it, because I don’t want to limit the club to gay and straight people.My school has been really supportive of our activism. My school is an amazing place overall. I really don’t know where I would be without it. Of course, you’re going to find homophobia almost everywhere. In my school, though, it’s addressed. If someone gets bullied, my school does something about it.

I’m trying to change things. Right now, it’s little things like bake sales and school clubs, but I’m branching out more as I’m growing older and gaining more independence. I went to the Dyke March for the first time this year, and was really blown away. I definitely want to volunteer next year. We all have the power to change the world, even if it’s one step at a time.