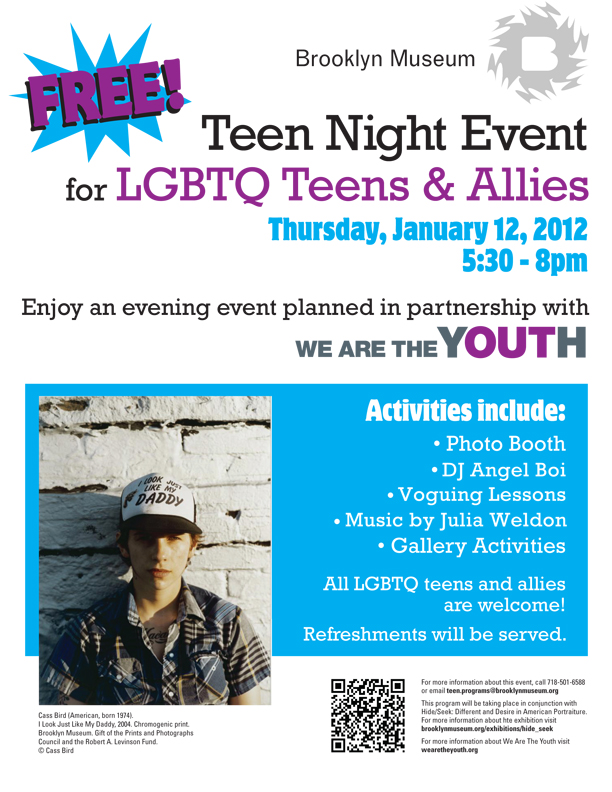 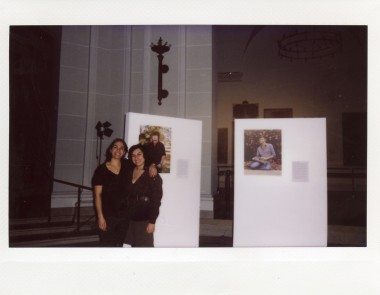 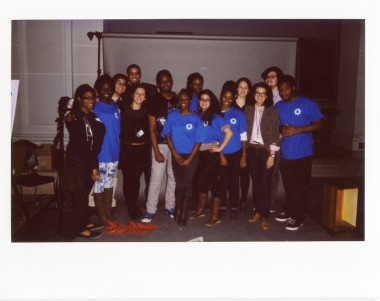 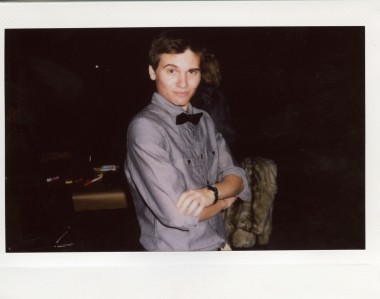 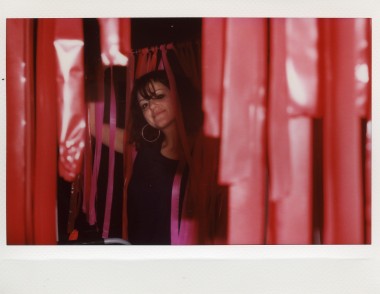 Special thanks to Hot Sundae for their graphic design awesomeness, Erika Sabel for her rad installation, Cheri Ehrlich for inviting us to be part of the Teen Night and everyone else at the Museum (especially the Brooklyn Museum Teens) who made this event possible!

You can check out some of the photo booth images here.

TEEN NIGHT TO KICK OFF WITH A VOGUE PERFORMANCE! 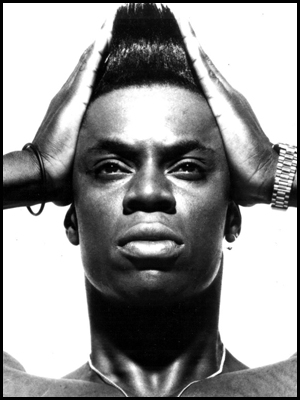 Archie Burnett is a well-respected force in the underground dance world. 30 years of dance in NYC’s hottest underground clubs has made his style unique, strong, and confident. He has performed and taught his craft in various parts of the world. His bodies of work range from music videos, to features in dance magazines like “Dance Ink,” and the “Village Voice” dance section feature, to performance coaching for up-and-coming recording artists.

SHADOW LOVER ADDED TO THE LINE-UP! 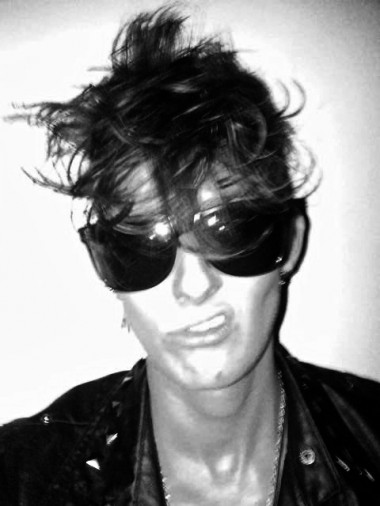 New band added to the lineup for Thursday! Shadow Lover has released three albums, toured the east coast, and performed in diverse venues ranging from the acutely bizarre to the traditional space. The band often brings in a creative family of movement artists, musicians, video artists, and visual artists to add glorious volume to the pop queer love music that fills the space.

WHAT IS HIDE/SEEK ALL ABOUT? 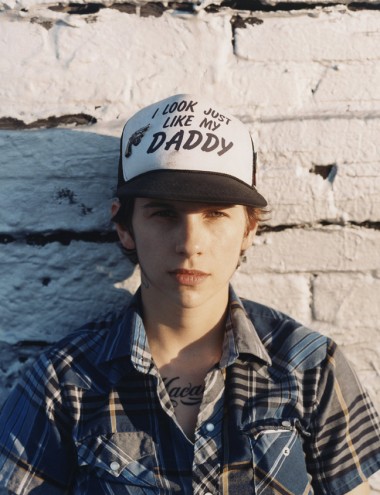 What is HIDE/SEEK all about?
HIDE/SEEK: Difference and Desire American Portraiture is the first major museum exhibition to focus on themes of gender and sexuality in modern American portraiture. The exhibition brings together more than one hundred works in a wide range of media, including paintings, photographs, works on paper, film, and installation art. Featuring work by artists such as George Bellows, Marsden Hartley, Georgia O’Keeffe, Jasper Johns, and Andy Warhol, HIDE/SEEK charts the under documented role that sexual identity has played in the making of modern art, and highlights the contributions of gay and lesbian artists to American art. (Brooklyn Museum)

What is the controversy surrounding HIDE/SEEK?
HIDE/SEEK: Difference and Desire in American Portraiture opened on October 30th, 2010 at the Smithsonian National Portrait Gallery in Washington, D.C. as the first major American exhibition to highlight sexual difference in American portraiture. Although originally greeted with praise, one month after opening day the show came under attack. The Catholic League, a right-wing political group, Virginia Representative Eric Cantor, and now Speaker of the House John Boehner launched a targeted attack on a video work by David Wojnarowicz entitled “A Fire in My Belly” — a piece that included 13 seconds of ants crawling on a crucifix. House Speaker Boehner and Representative Cantor threatened the Smithsonian Institution with cuts to their budget for displaying a work they deemed blasphemous and on November 30th, 2010, Smithsonian Secretary G. Wayne Clough removed the video from the gallery.

In response to this act of censorship, hundreds of museums, galleries, and cultural institutions around the world organized protests, discussions, lectures, and screened Wojnarowicz’s film at events, in window displays, and in galleries.

In a grand statement of support, the Brooklyn Museum in New York and the Tacoma Art Museum in Tacoma, Washington stepped up to host the exhibition in its entirety. The exhibition opened November 18th in Brooklyn and will open in March of 2012 in Tacoma, HIDE/SEEK will continue to create waves and conversation and hideseek.org will continue to document this pivotal moment in American history. (hideseek.org)

For more information check out hideseek.org, a website founded to provide a central, comprehensive source for information about the responses to and eventual censorship of the HIDE/SEEK: Difference and Desire in American Portraiture.

WE ARE THE YOUTH PARTICIPANT, KADEN, TO MC TEEN NIGHT! 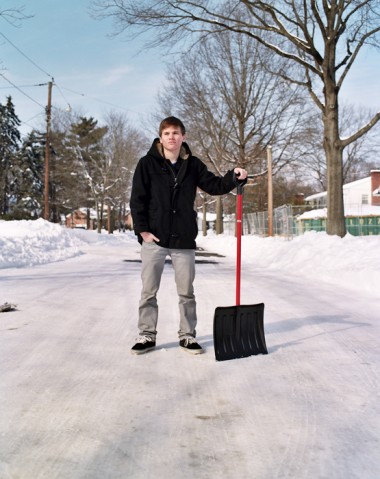 This just in…We Are the Youth participant, Kaden will be hosting the Brooklyn Museum FREE Teen Night Event, acting as MC for the evening! Besides being an all-around awesome dude, Kaden is a Cinema Studies student and, as you can see from the above photo, really good at shoveling snow! So come one, come all, MC G-Skillz in the house! 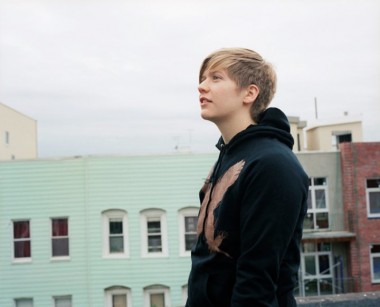 How many times can we write, “if you’re thinking we couldn’t possibly make the Brooklyn Museum FREE Teen Night Event any cooler, you’d be wrong???” I guess one more time, because we’ve just confirmed NYC-based guitarist, songwriter and composer Julia Weldon for the event! Julia likes “rooftops and cornfields and all the people in between,” and will be gracing us with her musical talents on January 12, 2012. You can check out her music here and here and if you needed a 100,000th reason to come, there you have it.

If you’re thinking we couldn’t possibly make the Brooklyn Museum FREE Teen Night Event any cooler, you’d be wrong!! The Brooklyn-based design studio Hot Sundae has jumped on board and will be contributing their rad designs to the January 12th event. They are responsible for (cool!) things like this: 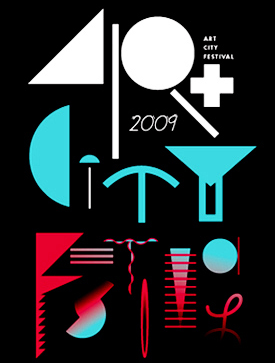 Hot Sundae was founded by Amelia Irwin and Nicole Killian and specializes in “hard work and awesomeness.” (I mean really, with a tag line like that, how can you not dig it?). 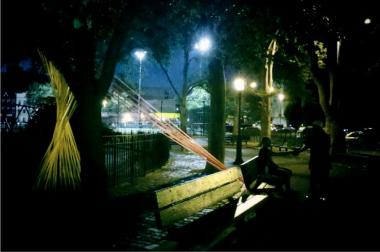 This just in: good friend and artist Erika Sabel will be contributing her design talents for the Teen Night Event! As if you needed another reason to come, now they’ll be some sick decorations! Check out Erika’s work here, here and here. Excited to have you on board, Erika!

Check out our new Facebook page for the Teen Night Event!
Now go and invite EVERYONE YOU KNOW. 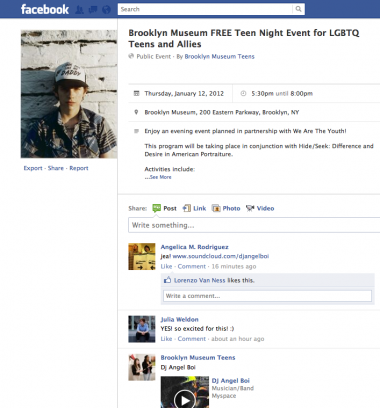 We’re happy to announce that DJ Angel Boi has just joined the line-up for the Teen Night Event! Angel Boi is a dj/producer that makes original remixes and mashups, and holds several residencies in the NY queer party circuit. Check out her jamz here! 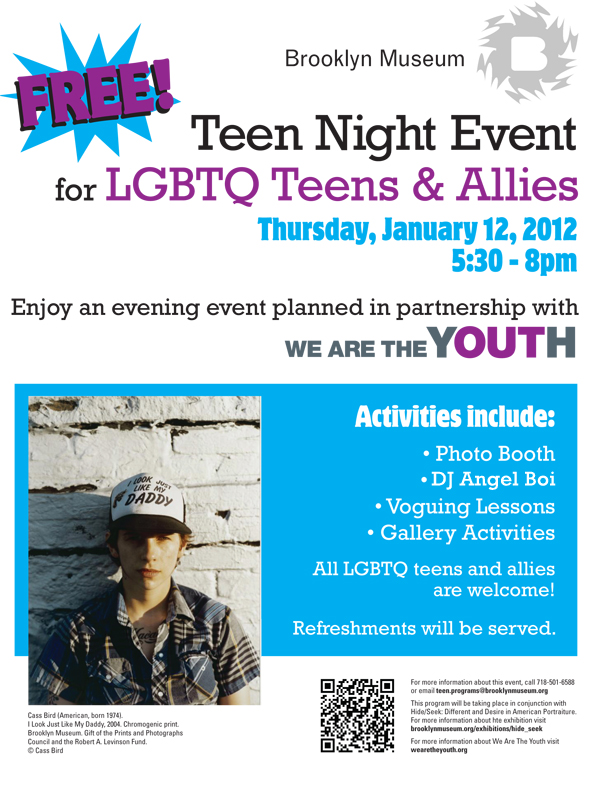 Thanks to Steph Peller for her (as always) lovely designs!