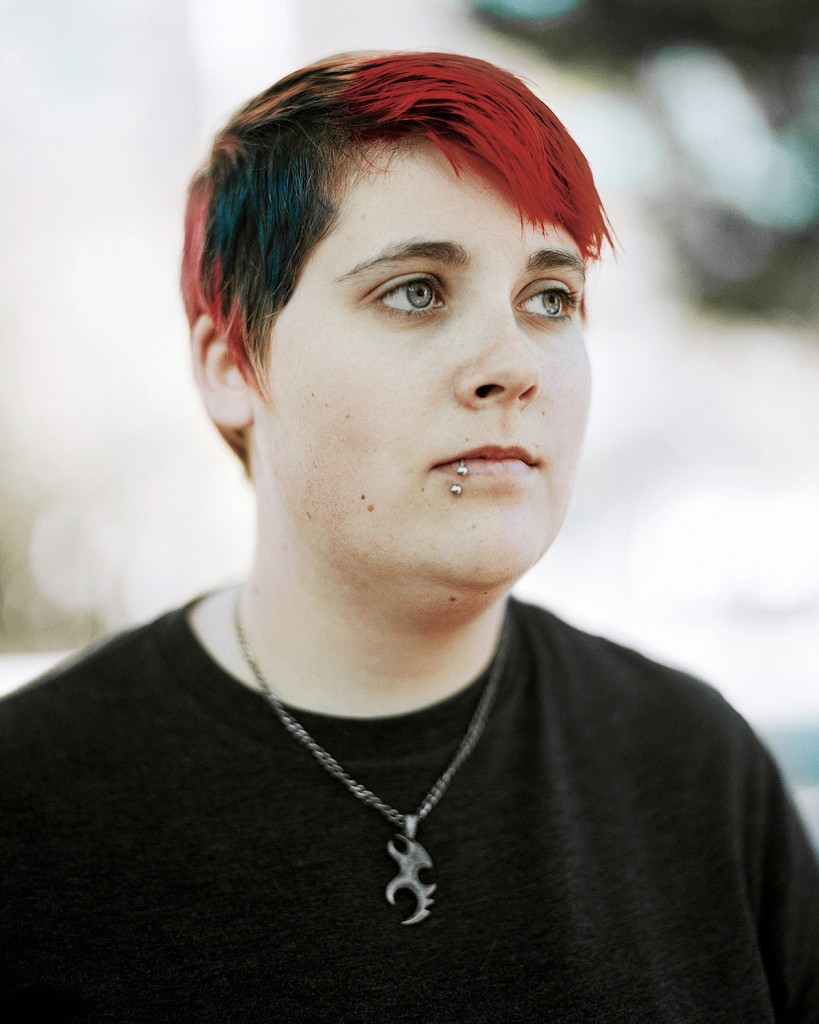 When I was little I wanted to be a boy, and I would call myself Sam. I’d go to Sunday school and people would be like, “Is that a little boy or a little girl?” My mom would be like, “Why does it matter?”

My older sister Genny told me, “Mom and Dad didn’t think you’d be a lesbian. They thought you were going to be transgender.”

As I got older I realized I was comfortable being a female. While researching the gay community, I realized what I was feeling was the butchness of being a lesbian. I like short hair and hate dresses. It’s more of a masculine appearance than a masculine action. If I’m anything, I’m a soft butch. It’s more common here for lesbians to be more feminine. I don’t know if it’s societal or what.

I never try to do anything just to be weird or individual, but people have come up to me and told me I’m brave for dying my hair. I’m like, “Soldiers are brave. Firefighters are brave. I just dye my hair funny colors.” But so many people are scared to do strange things with their appearances.

I started dyeing my hair when I went to high school at the Alabama School of Fine Arts (AFSA). I felt so pent up at middle school. It was all a football culture, and everyone was wearing Abercrombie. It was like  the University of Alabama but it didn’t have the small, artsy community to be part of.

I had wanted to be out in middle school, but I was scared because when my girlfriend Brittany first came out teachers had to walk her to class. Brittany and I dated for, like, a month, but I wanted to keep it a secret. I started hearing rumors about us, got ticked about it and broke up with her.

But my high school was such an open place it was easy to be out. You were seen as uncool if you were discriminatory to gay people or if you were really religious. Anything seen as cool in Alabama is seen as weird at ASFA. It was awesome.

When I started high school, I was 14 and shouting that I was a lesbian from the rooftop. I became the big lesbian on campus and the big activist. I helped found the school’s Gay-Straight Alliance and started my school’s participation in National Day of Silence.

I realized I was gay when I was in fourth grade. I had seen a music video for the band t.A.T.u. I looked them up on the Internet. It was the first time I had seen the word “lesbian.” Then I went to a Girl Scout sleepover at the Birmingham Museum of Art, and I had t.A.T.u. written on my hand because I thought writing on my knuckles was really cool. This girl said she really liked them. Then I started staring at her all night. I realized, “I don’t just want to be friends with her. I think I have a crush on her. I think I’m gay.” People say that t.A.T.u. are fake lesbians, but hey, they helped a lot of people!

I came out to my parents and my sister when I was 13, and they have been incredibly supportive. My mom is very active in the community, and she went to Parents, Friends and Family of Lesbians and Gays (PFLAG) meetings. My dad wants to be more of an activist than me. He goes off on anyone who says anything anti-gay. My parents are liberal for Alabama. They met on a Democratic political campaign.

I’m part of the Alabama Safe Schools Coalition, so when I came to the University of Alabama everyone kind of expected me to take a leadership role. And I’m like, “I just got here. Chill.” But I found gay people very quickly. I marched in the homecoming parade with the gay group, Spectrum. We were holding hands so we wouldn’t get separated, and someone wrote a letter to the school paper saying, “I’m a fan of free speech but I don’t want to see guys kissing and holding hands.” And no one was kissing! You can’t kiss and walk at the same time.

But the environment here is surprisingly alright. I haven’t walked around holding a girl’s hand yet, but I’ve had my “Legalize Gay” shirt on. I know there are homophobes because I hear about them, but I think it’s a generally accepting campus.

I’m excited to be here and take courses that will help me have a career in zoo education. My mom forced me to volunteer somewhere in high school since I spent all summer watching TV. My friend volunteered at the zoo, then quit, and I ended up volunteering there for five years. I love pretty much any animal. Except sharks.

So many people in my senior class of high school had this drive to get out of Alabama. But I feel like if all the liberal-minded people leave, it’s a haven for bigotry. But I don’t know if I’ll stay in-state after I graduate from college. I want to work in zoo education, and when it comes down to what I want to do, the Montgomery or Birmingham zoos are my only options. Surprisingly, my dream zoo is in San Francisco.

As told to Diana Scholl.
Photo by Laurel Golio, taken in Tuscaloosa, AL, 2010
To tell your story, email hello@wearetheyouth.org