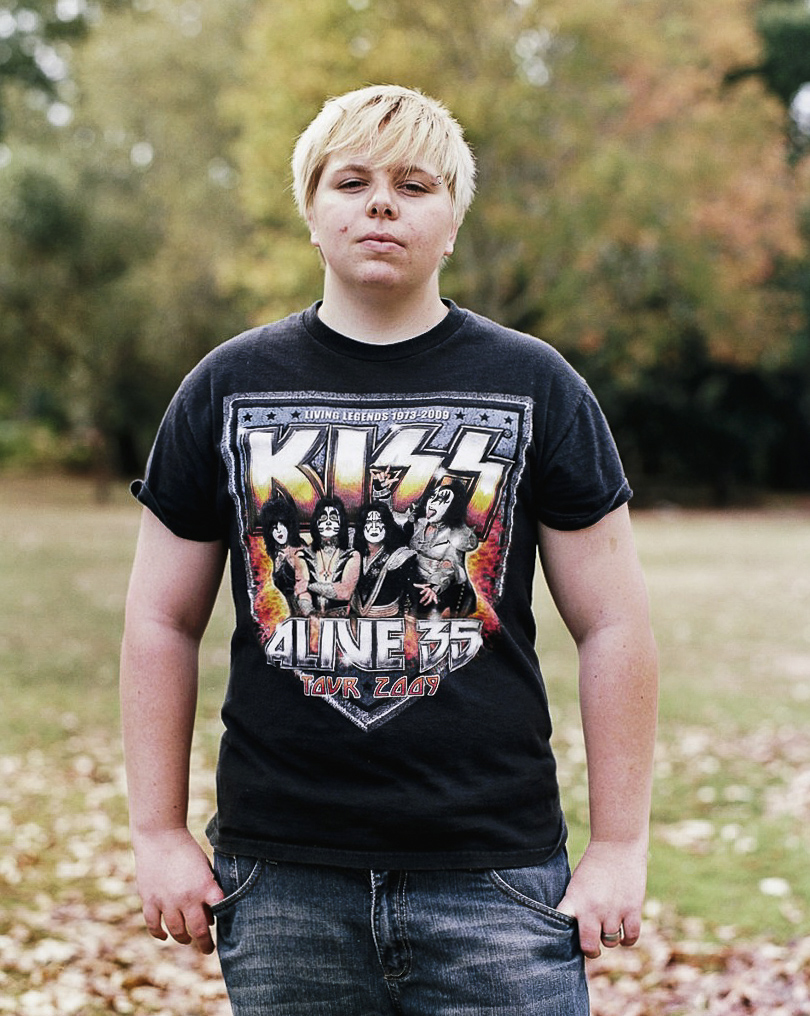 I love soccer. I could watch it for hours. I coached kids over the summer, and I love watching them develop as the season goes on. It’s exciting to see them get excited.

I used to play, but I broke my knee a year ago so I can’t run much. I was in a wheelchair for six weeks. I couldn’t use crutches because I had just had surgery on my shoulder from a four-wheeler wreck. I was right out of rehab and had to be stupid and go skateboarding. That’s me in a bubble: one accident after another. I want to go in the trauma field of nursing because of my life experiences.

I got hit in the face two weeks ago on the way to a football game with Arkansas by a group of drunk 40-year-old men. I had a rainbow belt on and they thought I was a gay guy. Then they saw my chest so they started backing off. And I had to open my big mouth and say, “I’m not a woman.” So I’m just lying on the ground getting the crap beat out of me, waiting for it to end.

Stuff like that bothers me emotionally, but I can get over it physically. When I’m wearing my chest binder and people think I’m a guy, I don’t get bothered as much. Yesterday I was in Wal-Mart and a woman called me “sir,” and was talking to me like I was a man. There wasn’t that usual awkward pause where people don’t know what to call me. That was the best moment of my life.

I’ve told everyone I’m transgender but my roommates. I’m sure they’ll accept me, but trying to get through the policies of Auburn University is more of a problem since the school doesn’t have a policy dealing with transgender students.

I haven’t legally changed my name for the university. I’m waiting until I’m out of the dorm, so I’m not homeless. If the university sees me as a man, what are they going to do with me, since I’m living in a female dorm?

I’m the only out transgender person I know of on campus. There are supposedly two others, but they’re stealth.

My given name is Kahley, and that’s what my roommates call me. Everyone else calls me Chris. I talked to my mom about it, and Christopher Adam was the name I was supposed to have because my parents thought I would be a boy.

I came out to my family this year, and they’ve been really good about it. My mom’s the one who set up the appointment to get me on hormones. My mom’s really OCD, so she said as long as I don’t grow sideburns, she’s fine with it. I was tired of hiding who I am. But I want to be happy. I’m ready to take the next step.

I didn’t even know what transgender was until less than two years ago, when I started looking on the Internet. I was an army brat and grew up in really conservative, small towns. I was pretty sheltered from the world until about a year and a half ago. But when I learned what it meant to be transgender, it made so much more sense to me.

Growing up, there were times I’d do things that little girls should not do. I tried to pee standing up for the longest time. And every time I was forced to wear a dress, I cried. By second grade, my mom stopped trying to make me wear a dress.

I have a girlfriend, Amber. When we first met last year, I identified as a lesbian, but the label never really felt right on me. But I came out to Amber as transgender and she’s been accepting. She just changed her orientation on Facebook to straight. She labeled herself a lesbian before, but now she labels herself as straight when people ask her. She doesn’t care what other people think. She doesn’t love me as a girl or as a guy. She loves me for me.