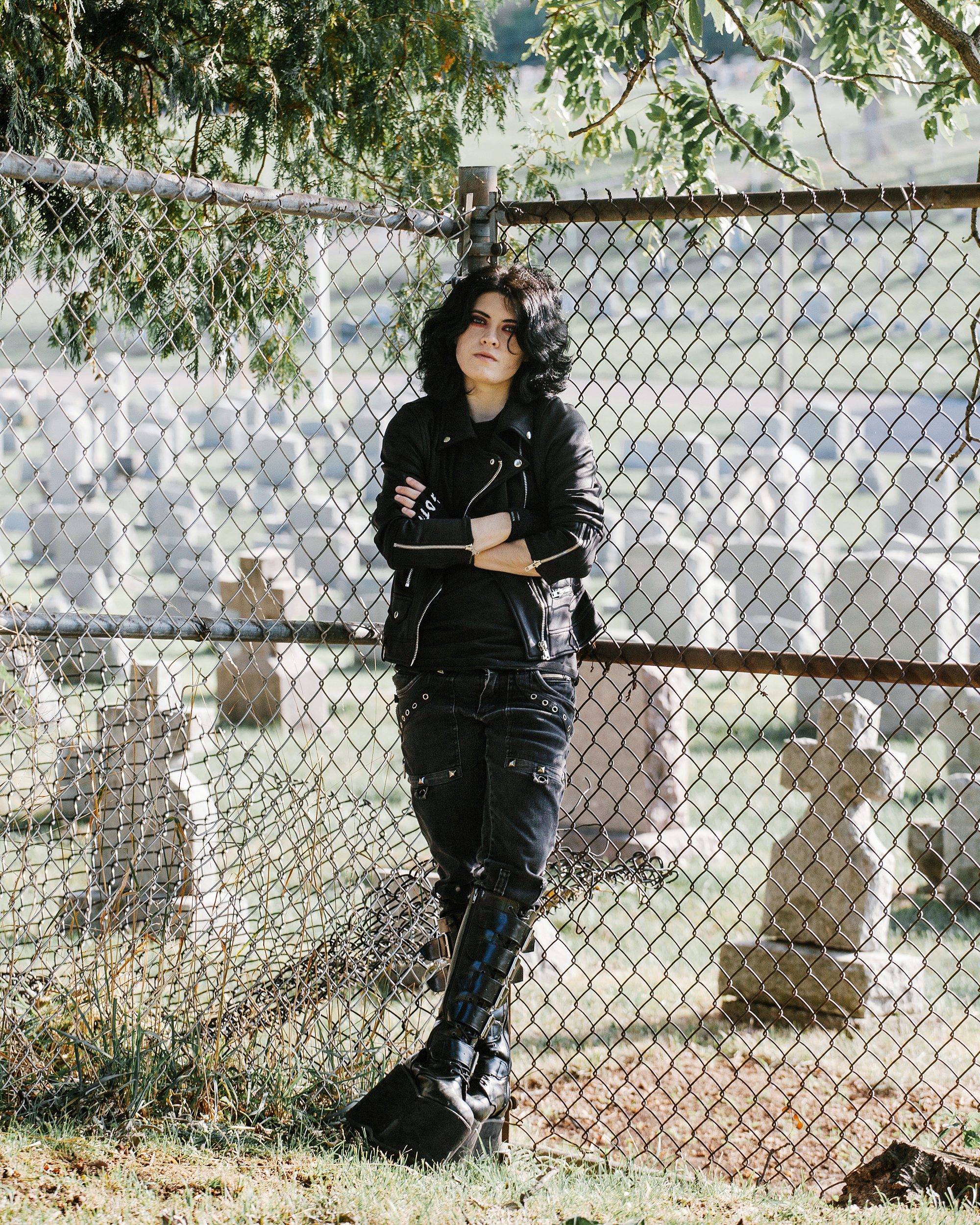 I’ve identified as Goth for maybe three years. My parents were both Goth, and my father still is. His nickname is Monster, he plays in a Goth metal band and has a bright green goatee. So I ran away from it for a long time because I didn’t want to be like my parents and I wanted to be my own person. I’d see different clothing articles and be like, “I can’t wear it because I’m not Goth.” And finally I was like, “Why am I trying to stay away from it?” It goes hand and hand with the trans thing. I can’t lie to myself.

Freshman year of high school I started living as male full-time. My girlfriend at the time sat down with me and said, “I think you’re transgender.” And I was like, “I don’t think I can do this. There’s a lot of work that goes into it. I can barely live day to day. I don’t have anyone to help me.” That on top of the abuse I was experiencing from my parents. It just felt like everything was collapsing.

Before I really realized what transgender was I thought, “I wish I was a boy” and “this doesn’t feel right.” My Chemical Romance is my favorite band and I got really, really into them in fifth grade. Gerard Way did an interview at one point where he said that he never felt comfortable with masculinity and never identified as being 100 percent male and I felt that way about being female. I remember watching Gerard Way and thinking, “I want to look like him” and then looking in the mirror and thinking, “But I don’t and that’s not okay.”

I started to feel worse and worse and worse. I started self-harming and attempting suicide. When I was about 13 years old, I attempted suicide by trying to hang myself. And my stepfather found me and got really, really, really irate about it. He and my mom had six or seven acres of land and these big woods where my brother and I would run around. My stepfather took me out into the back with my shotgun and said, “If you really want to kill yourself so bad, I’ll use you as target practice.”

And he just kind of left me there, a mess, crying. So I crawled back to the house after a while, probably a few hours. I sat down with my radio and the first song that came on was “Welcome to the Black Parade, and I was like “I can do this. This is fine.” I started doing what made me comfortable and doing less of what made other people comfortable.

I saw Gerard Way perform two Novembers ago, and wrote him a whole letter about everything he’d done for me and how I kept myself alive and how I want to use my music to keep other kids alive like he did for me and how I took his name because I want to honor him and it’s the least I can do. During my favorite song from the new album he took my letter from my hand as I sank into the pit. It was the best thing ever. A lot of people were giving him stuff, but I’d like to think he read my letter and it was impactful.

I’m a lot better now, and it’s not so much anymore about wanting to die for the sake of dying but wanting to be okay and seeing that as one of the only options especially when things get very overwhelming. I realize that’s not healthy and I’m working on that. I have a lot of dysphoria. It’s gotten to the point over past few weeks I haven’t been able to uncover my mirrors or brush my hair or take care of myself. Being okay to me means being able to shower on a regular basis and not being dysphoric or self-loathing. Eating occasionally. Being able to take care of the basics.

Not killing myself is still very much a struggle, but staying alive is best thing that’s ever happened to me.

As told to Diana SchollPhoto by Laurel Golio, taken in Syracuse, NY, 2016.To share your story, email hello@wearetheyouth.org