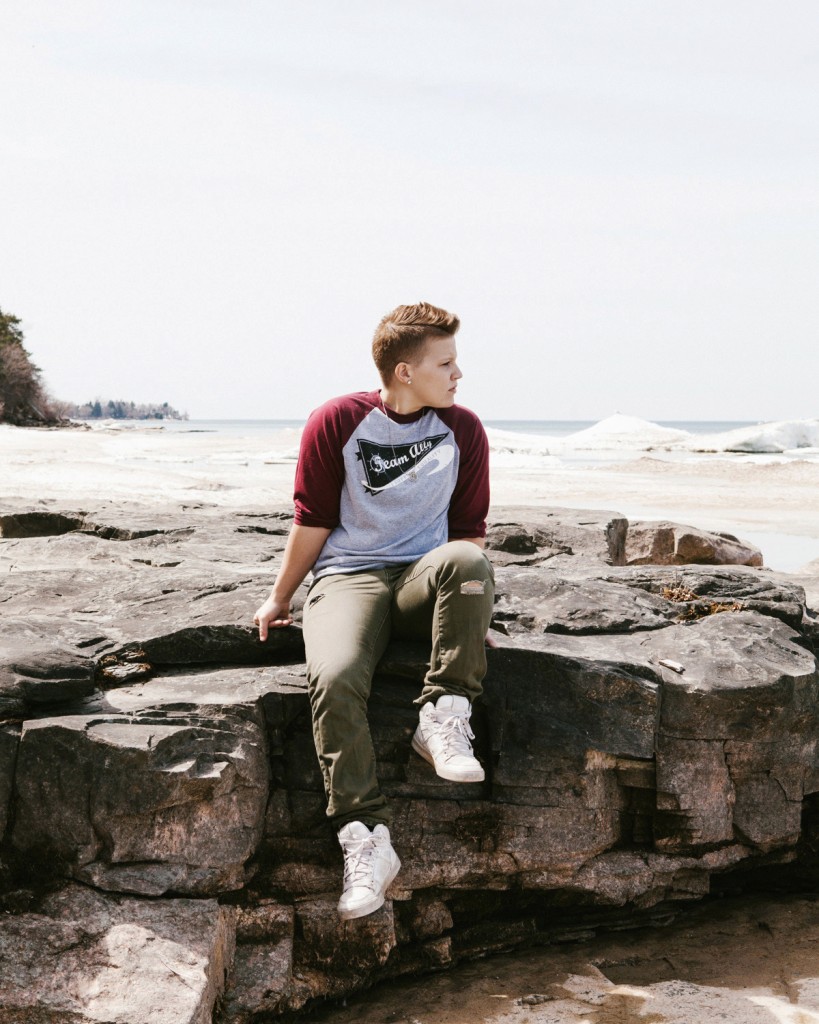 I joined a sorority my second semester of my freshman year. When I pledged, there was another sister who was so gay, so I had no issues. For date parties nobody cares if I bring a girl. I couldn’t imagine my Oswego experience without being in Greek life. The friend group and support and as stereotypical as it sounds, the connections.

College was always the plan for me. I considered military for a little bit, but when I got to high school there was still “Don’t Ask, Don’t Tell.” That and with stories of veterans not having the benefits they deserve, I decided the military wasn’t for me. My grandmother got a full ride to college but fell in love and threw it all away for a guy, so being academically driven and being involved has always been a priority for me.

We used to live in Oneida, in a not-so-great section in public housing. Our downstairs neighbors were drug heads and cokeheads. But my mom was always big on getting up, going to school, staying involved. I’ve played basketball since I was six. When I played basketball I was able to be a kid. At the elementary school everyone was always really great. My principal even paid for me to go on a school trip to Boston one year. And my grandparents were also really strong figures keeping me in school, and giving me the opportunities to do things.

My grandmother found out I was gay when she was tidying up my room and found a letter from my second girlfriend. My girlfriend was in a nursing class with a friend of mine, so we’d do a really corny thing where we’d seal letters in an envelope and my friend would be the courier. I had them in a folder underneath a chair in my room, and my grandmother was obviously looking for them or digging around, which she denies, but I know her well enough to know what she was doing. I came home to a sticky note on the phone saying to call my mom. I called my mother she said my grandmother had found the letters and was freaking out.

My grandmother went from being mad that she was the last to know to then being upset because to quote her, “worried about the haters” and didn’t want to see anything bad happen to me. Occasionally she’ll ask if I will grow my hair out or something, but she’s awesome.

In high school if someone asked me I said, “Yeah, I’m gay,” but that was it. There was a girl my senior year also named Hannah who was a lot more out and for a lack of a better word, flamboyant. She got a lot of shit for it. People were friends with her but said a lot of bad things and picked on her. And I didn’t put it in people’s faces because I didn’t want to get the backlash.

My freshman year here I was out but not heavily telling people that. I was doing laps at the student involvement fair and eyed the table for Pride. I was just getting up the courage to go. By the end of my first semester in college I was totally out.

As president of the Pride Alliance, you have to be okay with being out on campus. I have people coming to my office hours. I can empathize with people really well.

As told to Diana SchollPhoto by Laurel Golio, taken in Oswego, NY, 2015.To share your story, email hello@wearetheyouth.org