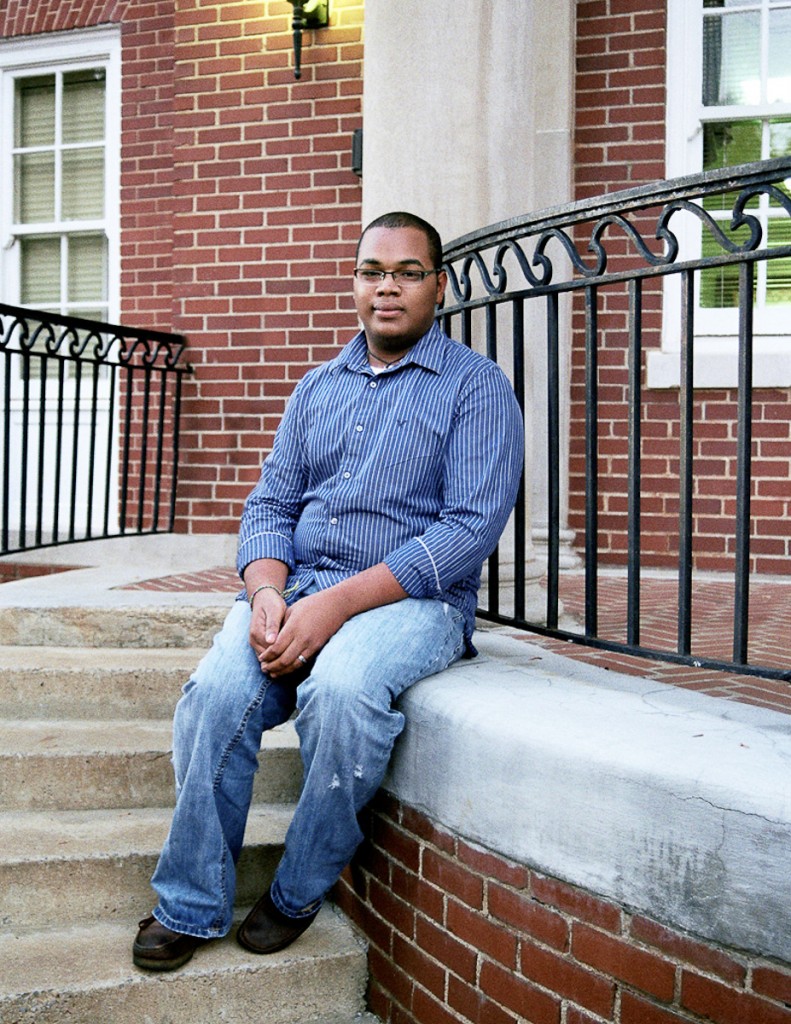 Lambda Chi doesn’t care if you’re gay or straight, or what race or religion you are. My big brother in the fraternity’s also gay. He’s the fraternity president and dating the rush chair. At mixers we can bring a same-sex date. I really like the brotherhood events and the stories I’ve learned from my fraternity.

I went through rush and got my bid from Lambda Chi. Lambda Chi is the first frat that said no to the pledge system, because it leads to hazing. They don’t even call us pledges. I’m an associate.

When I was looking at colleges, I didn’t think I’d want to go to Montevallo because it’s in a small town in Alabama. But then I saw how represented the GLBT community was. It’s been wonderful.

When I started school, I wanted to be a choral director. I was classically trained at piano and still sing in the choir concert, but I switched my major to social work and psychology. I realized I really want to help people.

It’s so great to be in a place that’s open and cool. It’s definitely a change from high school and middle school. I moved from Michigan to Tuscaloosa in eighth grade. Throughout high school there were people whose parents were like, “We’re not racist but … we don’t want our kids to date people of a different race.”

I got picked on, especially in the South. This guy in eighth grade rode our bus and hit me upside the head. We took it to the police and met with the middle school administrators. Then I had to go to high school with him. I reported every single thing he did to the school counselor. He eventually dropped out of high school.

I was always really quiet and more feminine, so people thought I was gay, but I didn’t want to be. My local church was really conservative. I was really afraid I wasn’t going to make it to heaven. In 10th grade, I was dating someone but wasn’t open about my relationship.

During that time, I was really depressed a lot. I can honestly say I thought of ending everything. There was one day I got in a fight with my mom. I remember crying so hard that day. Later, I was clenching a bottle of her painkillers.

I really think it was divine inspiration that I didn’t die. I just sat there and eventually calmed down. I thought about how I wanted to be a music teacher, and if I died I wouldn’t be able to do that. I talked to a school counselor. I never did tell my mom about that.

After that, I tried to become more optimistic. My absolute BFF was raised Unitarian, and she got me involved in the Unitarian church. I met a lot of other gay people there who gave me lot of inspiration. I still believe in God.

Around 10th grade I started telling a lot of my friends I was gay. I’m kind of glad. Before then I was scared, but once people were like, “Whatever,” I could be more open. That was really great. My dad is really cool about it and my mom has gotten better. I brought my last boyfriend around, but we don’t really talk about it. My grandmother’s amazing. She’s a member of Parents, Friends and Family of Lesbians and Gays (PFLAG). She just wanted to understand.

I’m so happy with how things are now. I’m in one of the best schools ever. I feel really good about myself. I think I’m making a lot of good decisions.

As told to Diana Scholl.
Photo by Laurel Golio, taken at the University of Montevallo, AL, 2010
To tell your story, email hello@wearetheyouth.org