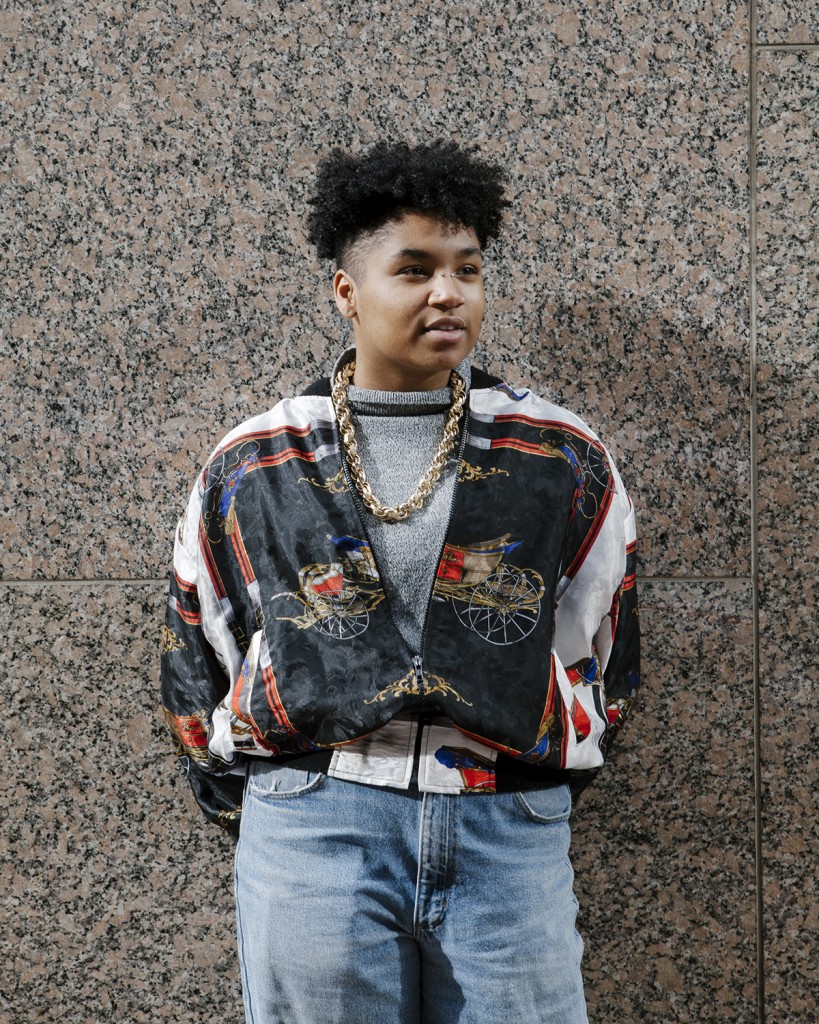 Life’s kind of bittersweet right now. I feel like this has been a year of survival. To feel better, sometimes I allow myself to be angry at myself. Sometimes I’ll just walk into my school counselor’s office and cry. Often times I’ll listen to music or have a straight-up conversation with myself. What makes me feel beautiful is looking at past pictures of me and my friends, or when my friend draws on my scars.

Going to Creating Change has helped. I felt like I was in heaven. I got to meet a lot of queer black trans people that I had idolized on Tumblr. I had to pinch myself that I wasn’t dreaming. I’d never been in a space where I could look around and everyone is trans or a person of color. Even the way I walked was different. When I’m in school I’m either puffing out my chest or breathing in. I get bumped a lot in the hallway, especially by the white cis boys. Because of that I’m always tense. Now I walk strong, but don’t puff up my chest like I have something to prove. It helps my health physically.

Last year, I was dealing with my depression and my eating stuff. I used to cut every day and had an addiction from cutting. One day I had lost a lot of blood the night before, and having to remember what bathroom to go to was so overwhelming, I just broke down and cried. I went to a teacher that identifies as genderqueer, and said, “I’m just so tired.”

Ever since I was a baby I would ask other people, “Don’t you forget you have a chest?” or “Don’t you forget what bathroom to go to?” I wanted to know I wasn’t the only one who felt that way. Then my teacher gave me the language for it. I didn’t realize not everyone had to remember the gender they were forced to identify with at birth.

I started identifying first as genderqueer, and now as a transman. I had come out as bisexual when I was 12. My dad said at the time, “At least you’re not a transman.” And we laughed about it. I tried to pray the gay away with Christianity and it wasn’t working so I wanted to convert to Islam. I got over that in eighth grade. But then I had to come out all over again.

This is my first year changing my name on school records and changing my pronouns.  I wasn’t worried about being outed, since everyone already knew me, but I wanted to be called by the right name. I went in to the school office with all this confidence. I saw some white man on the couch on the computer and I was like, “I need my name changed.” He’s like, “why?” I said, “I’m changing it to Zeam because I am trans and my pronouns are they, them and he.” I was just super-sassy. And he’s like, “Okay.”

I see him in the hallway now and he says “Hey, Zeam, how are you?” I was like, “That’s the guy that changes names, I guess.” But it turns out he was the new headmaster. But now he respects me because I didn’t kiss up to him.

For my family, I will still answer to my birth name, because they have to get over their own hurt. My birth name was a combination of my mother and father’s name. I used to take refuge in knowing my parents were with me through my name.

As told to Diana Scholl.
Photo by Laurel Golio, taken in Denver, CO, 2015.
To share your story, email hello@wearetheyouth.org