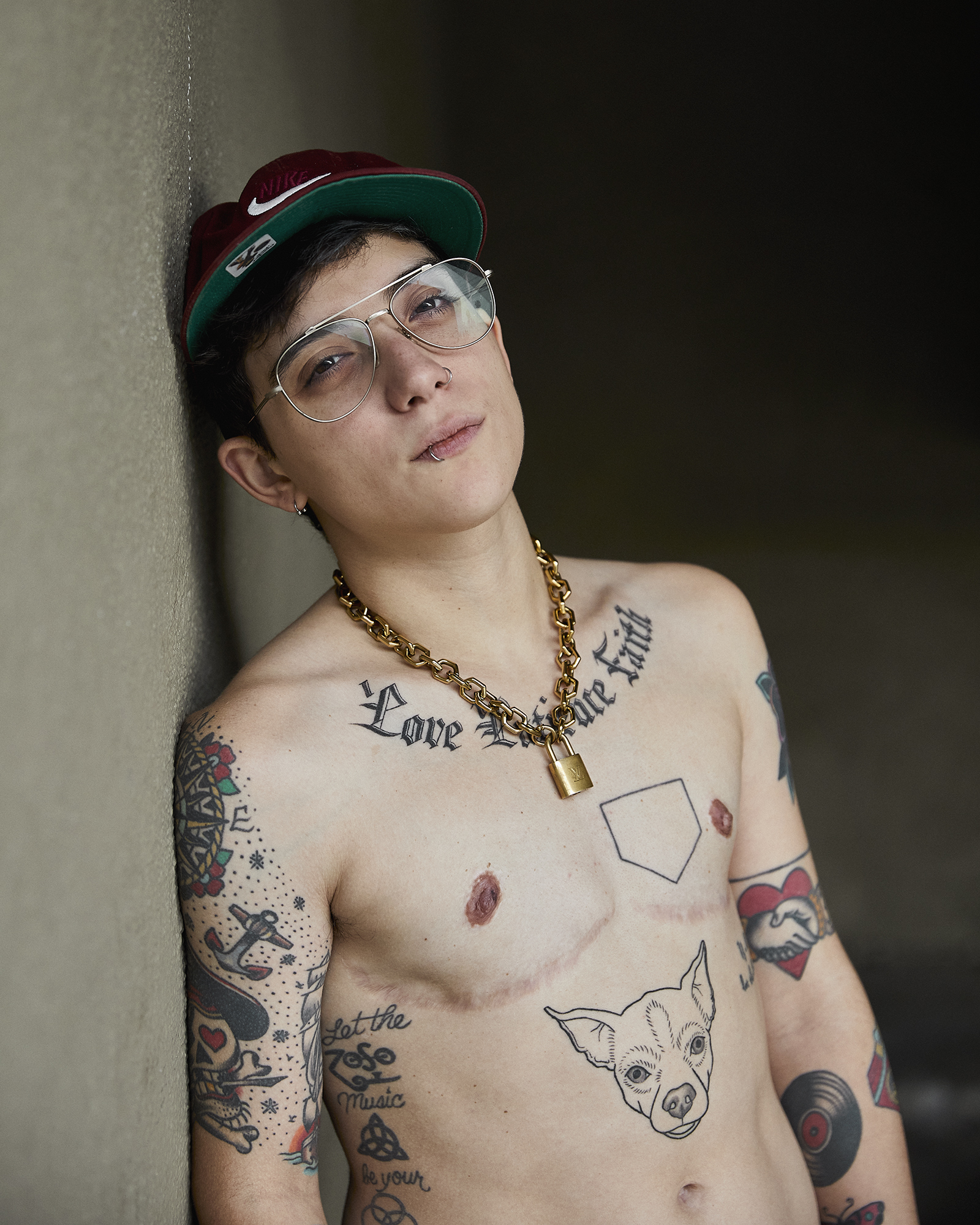 Reading my profile from 2010 took me back. I remember it but I don’t relate to it anymore. Thank God for that. I had top surgery 10 years ago, and I remember what before top surgery felt like, how my dysphoria was super bad, and how I’d have to shower with my eyes closed or I’d freak out. After surgery, I got way more comfortable with myself. Taking a shower isn’t a problem for me anymore. Most things related to my naked body aren’t a problem anymore. Top surgery freed me from most of my gender dysphoria.

My teenage years were really rough, partially because I wasn’t accepted as a trans person living in my conservative Long Island hometown. I experienced a lot of bullying and violence. I escaped with drugs and alcohol frequently. When I was 20, I had to get sober and start to heal some of that hurt. I’ve been consistently sober for over 8 years now. I’ve healed a lot but I still have a ways to go.

Sometimes, I’m still afraid when I visit my hometown. Even at my shows there I’m afraid of getting attacked sometimes. I have a lot of trauma from when I lived there. I feel like I was meant to be in California, for sure. Being around creative people, being around LGBT people. There’s more room to be authentic here and it feels way safer than Long Island.

I went back to talk to the students at my old high school in October (2021). When I was in school I had to fight with petitions and walkouts for my rights. Now there are so many students who are out and proud and they’re happy. Plus, they are being respected by their peers. They don’t seem to have to fight to be themselves. I’m so glad I get to see that in my lifetime because I wasn’t sure if I would. I think I was 22 the first time I saw the trans flag in a storefront. I had never seen the flag outside of a pride festival.

Even though things are still rough for the trans community, it’s a lot better now. There’s more awareness. Back when I came out there were limited resources. It was really hard to find community. There were no spaces for young people. There were only six top surgeons in the United States to pick from when I had my top surgery, now there seems to be hundreds.

It’s harder in some ways in society because with more visibility there’s more pushback from the government. There’s anti-trans bills all over the country right now. It shows that trans people are visible enough that they have to make laws to erase us. They won’t erase us. They can never erase us.

When I first came out and said I was trans, people didn’t know what that meant. Now unless you’re living under a rock, you do. Every revolution and every movement has pushback. These laws are weighing heavy on my heart. I keep trying to remember that pushback means that we are moving forward, we will have our rights soon.

I feel like I have everything I ever dreamed of. I get to live in Los Angeles, a city where I can be myself and have genuine love in my life. I’m surrounded by good people. I make my music and people actually listen to it. I’ve been able to perform hundreds of times. My parents are both so supportive now, along with most of my extended family. Things really do change. It takes time, but they do. I’m in love and recently engaged. I know my partner loves me for who I am. And now, I can say that I love myself for who I am. Being trans has gifted me with a beautiful community. It’s made me resilient. It’s made me more passionate. Being trans used to feel like a giant curse, but now I can say, that I love being trans, I love who I am. Being trans is a gift, it’s a blessing.