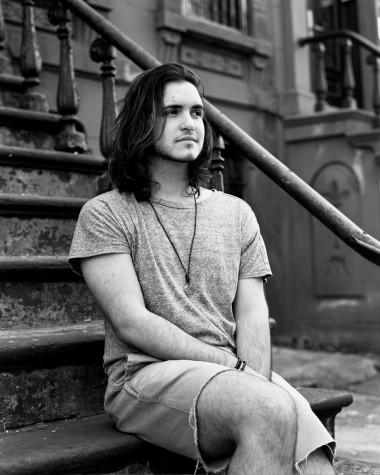 I wasn’t scared to move to New York, because I’d been sneaking away to the City since I was 11. My friends and I would skip school and ask people how to get to the Village. My dad wasn’t a parent who was overprotective. I never gave my parents reason to disbelieve in me.

I’ve been happy since moving to New York. Not as happy as I was in the beginning, but that was during the summertime when everything was great.

I was on the beach last summer, and guys would just hit on me. It was a lot easier for me to meet people in New York. It was on the beach that I met a 42 year old guy who was a social worker at NYU. We only dated for two months, but I really got to know him. I really fell in love with him. It was so cosmic, I guess. It was one of the greatest times of my life.

But I had to get rid of him. He didn’t know what he wanted. It was so unstable. One minute he didn’t want me, and the next minute he did.

I couldn’t possibly date someone my age. Even if they’re only a year older, they’ve always been older. I tried to date younger guys and it did not work out. Kids my age usually jump into relationships, which I think is reckless.

But my mind is so stuck on school and work now, I don’t want to date. I was always the kind of person who needed to be with someone, but I want to party and be free. A boy would take too much away.

I’m smart and very creative, but academically I have my moments. I dropped out of high school in ninth grade.

The biggest problem was my mother’s instability. She had a boyfriend and it was all about him. We were constantly arguing. I was going to move in with my dad, but then he called me up and said “I don’t want your gayness in my house.” So I got in contact with my aunt and uncle in Pennsylvania. If I had my own car I’d probably still be there. But I don’t like depending on people.

So I told my dad I couldn’t stay with my aunt and uncle and he said, “You are my son and you are coming to stay with me.” When he said I could stay with him in Newark, New Jersey, I couldn’t believe it. But I didn’t find myself going anywhere there. So that’s where my homelessness started. I could go home if I told my parents I was done with this struggling. But then I would be at step one. I didn’t come this far to go back now.

I was never on-the-street homeless. I did my research. I wasn’t going to stay at a regular men’s shelter. It’s very dangerous. I stayed at the Covenant House for 40 days. That’s when a bed opened up at Ali Forney. There’s only so many beds. There’s 4,000 homeless kids who identify as LGBT. If you don’t know about the services you’re out of luck.

I got my GED at Hetrick Martin Institute. My teachers helped me out so much. I totally felt comfortable being around so many gay kids, and it helped me accept myself even more. I never say that out loud, but it’s true. Growing up with my parents throwing it in my face all the time, it was really hard for me to accept being gay.

But since moving to New York, I act how I want to act. I have an internship in PR and am going to school at Kingsborough Community College. I’m so proud of myself. I’m kind of surviving. It’s not New York City unless you struggle.